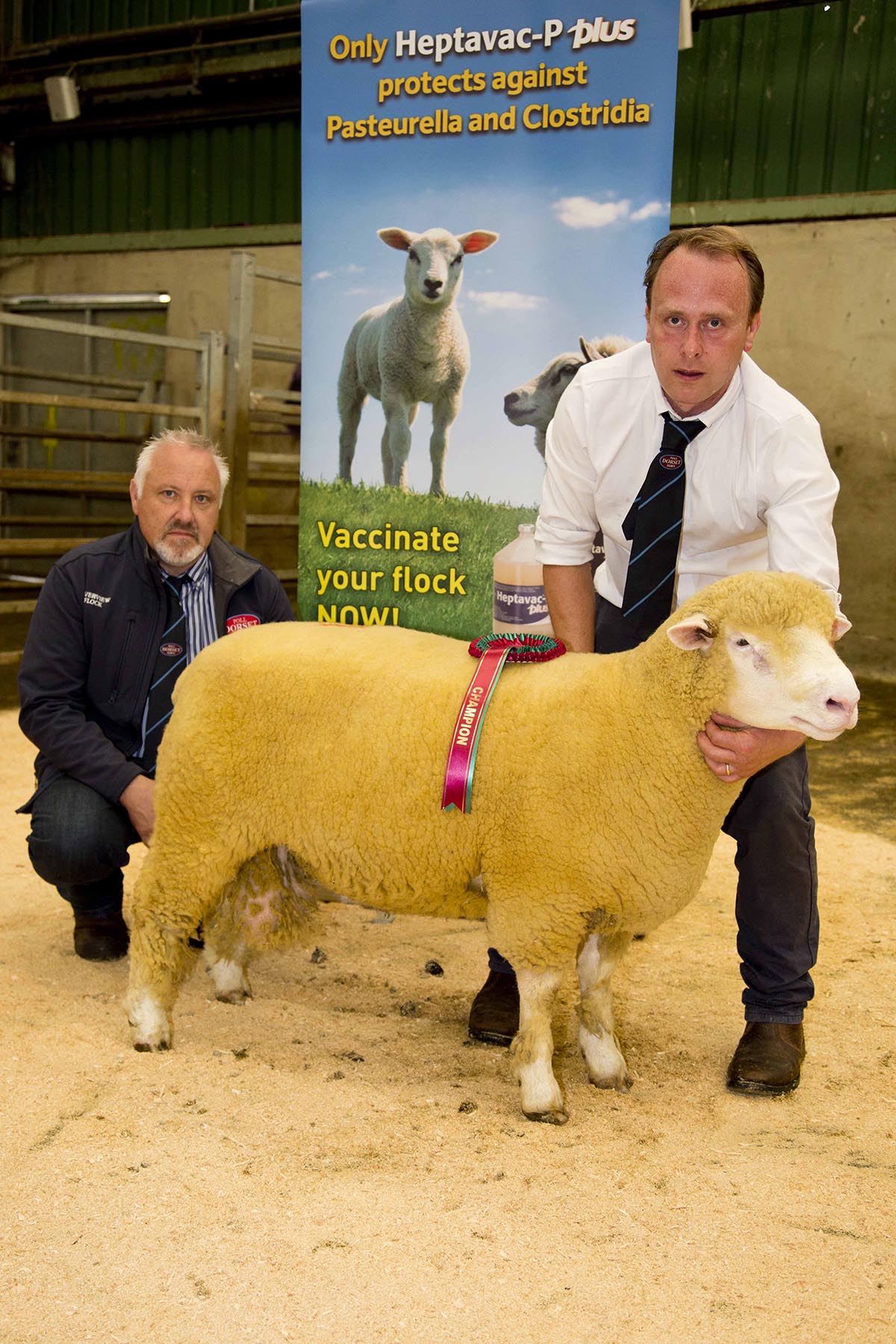 William Carson with the Champion, and Judge, Trevor Knox

The 6th Annual Show & Sale of Pedigree Registered Dorset Horn & Polled Dorset Sheep was held in Hilltown Mart on Friday 11th August 2017. This annual event was EU Accredited to facilitate immediate export of entries to the Republic of Ireland, and was very kindly sponsored by MSD Animal Health, manufacturers of Heptavac-P plus and Footvax.

This Export Show & Sale attracted a select offering of ram and ewe lambs with quality sheep coming forward for sale. While numbers were limited owing to the Sales Export status, there was keen interest shown by the strong number of buyers present. There was a noted level of interest from the Republic of Ireland, with buyers from 7 southern counties present, and this growing interest is currently leading to a marked increase in the number of new Flocks being established throughout the length and breadth of Ireland.

The earlier part of the day was given over to the judging of both the Ram and Ewe lamb Classes and this was expertly accomplished by Judge Mr Trevor Knox of the Riverview Flock, Armoy Co. Antrim.

Both Classes were keenly contested with top quality animals being brought forward for judging. The Judge, having carefully weighed up the attributes of all animals presented for show, found his Supreme Champion in a superbly bred ram lamb from the Downkillybegs Flock of W & K Carson. This tremendously formed and well grown young ram was sired by Richhill Wyatt, off a Downkillybegs dam. It later went on to sell for 400 guineas, being purchased by H J Smyth of the Rockview Flock, Ballynahinch.

It was noted that the sire of this Champion also bred the Champion of the recently held Premier Show and Sale in Ballymena.

In making his choice, the judge Mr Knox commented on the correctness and presence of the young ram.

The top price of the sale was achieved by a very strong and eye catching young ram lamb from the Ballytaggart Flock of Thomas Wright. This ram was sired by Ballytaggart Tonka, and sold for 540 gns to Mr Connell, Ballinalee, Co Longford.

The Reserve Champion was the ewe lamb from the Hilltop Flock of Richard Currie, a fine example of the Breed sired by Wilsey U768. This ewe lamb sold for 380 gns, being purchased by Mark Truesdale of the Donard Flock, Newcastle. 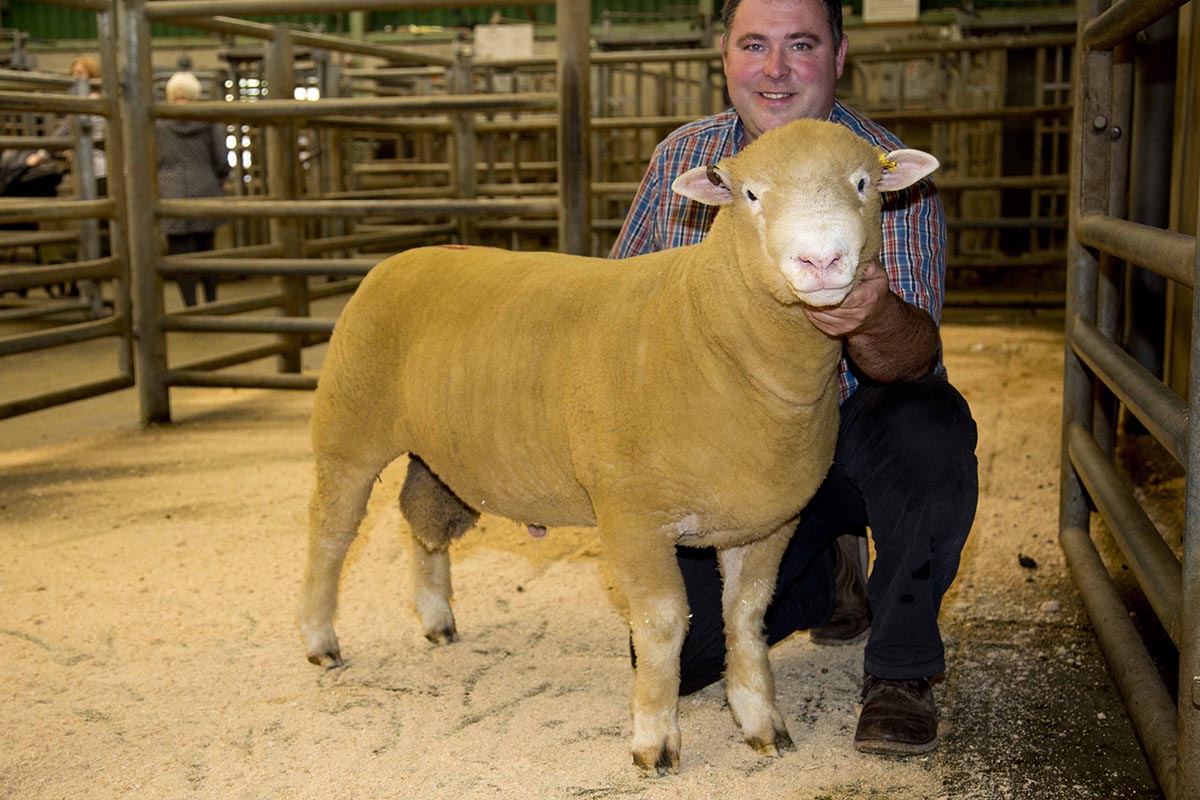 Thomas Wright with the top price of the sale. 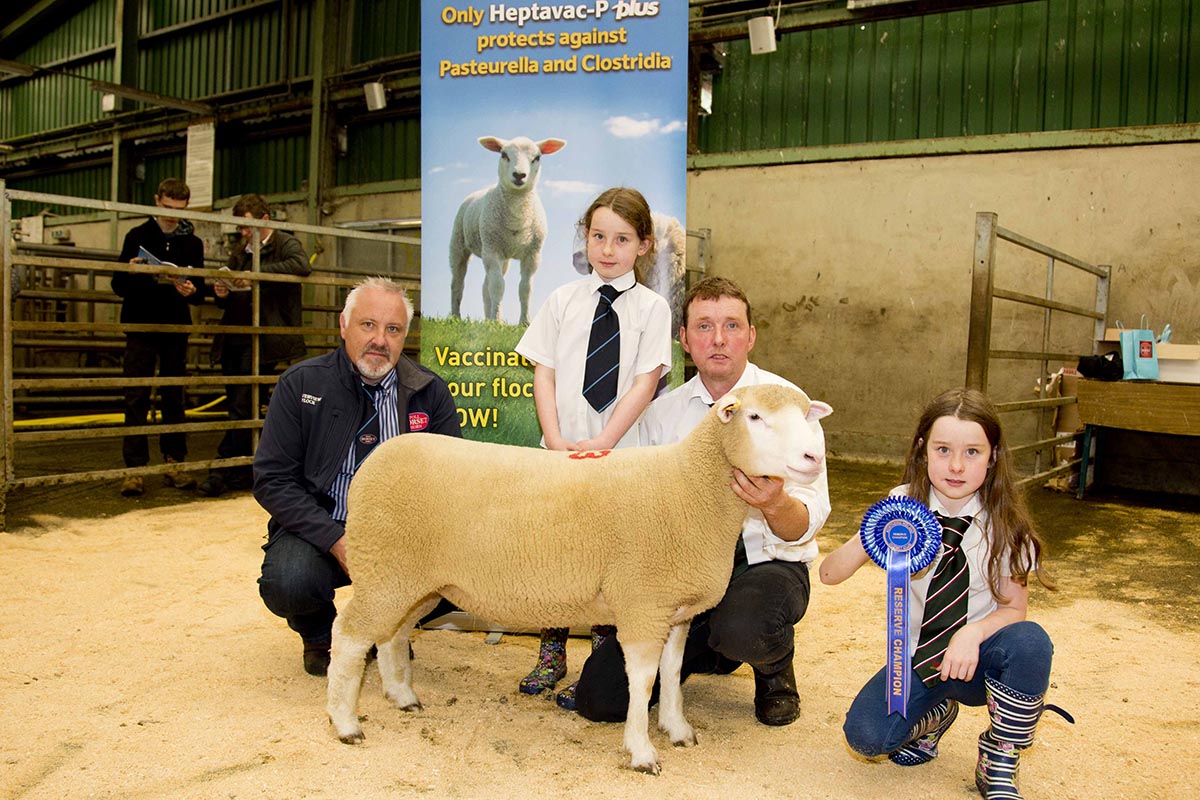 There was a high clearance of Sales in both Classes and Sale Averages were:

The Club would wish to record its’ appreciation to Mr Trevor Knox for his judging of the event and to MSD Animal Health for sponsoring the Annual Hilltown Show & Sale Prizes. The Club would also wish our buyers all the very best with their new purchases, with over one third having made their way South.

The NI Dorset Club would take this opportunity to commend the Breed for its qualities, both in the pedigree sector and its ease of lambing, fast growth rates and finishing in the commercial sector.