Dorset pedigree sheep achieved a level, commercial trade for rams which met a virtual clearance while ewes broke breed records at the annual Dorset May Fair in Exeter Livestock Centre on Wednesday (May 6).

Conducted by Kivells on behalf of the Dorset Horn and Poll Dorset Sheep Breeders’ Association, the sale saw well over 2,000 pedigree and commercial breeding sheep sold.

Averages for 128 rams sold, an increase of seven on the 2014 sale, were down by £55 a head on last year to £807.19, although fewer than 20 forward left the ring unsold. Accredited ewes averaged £303.42 for 46 sold while ewe lambs and hoggets levelled at £198.59 for 295 sold. A total of 2,224 pedigree accredited and non-accredited and commercial breeding rams and females went under the hammer.

Six rams topped 1,500gns with the top of 3,100gns for the overall male champion at the previous days’s show for Northern Ireland couple Trevor and Sharon Knox’s Riverview flock. 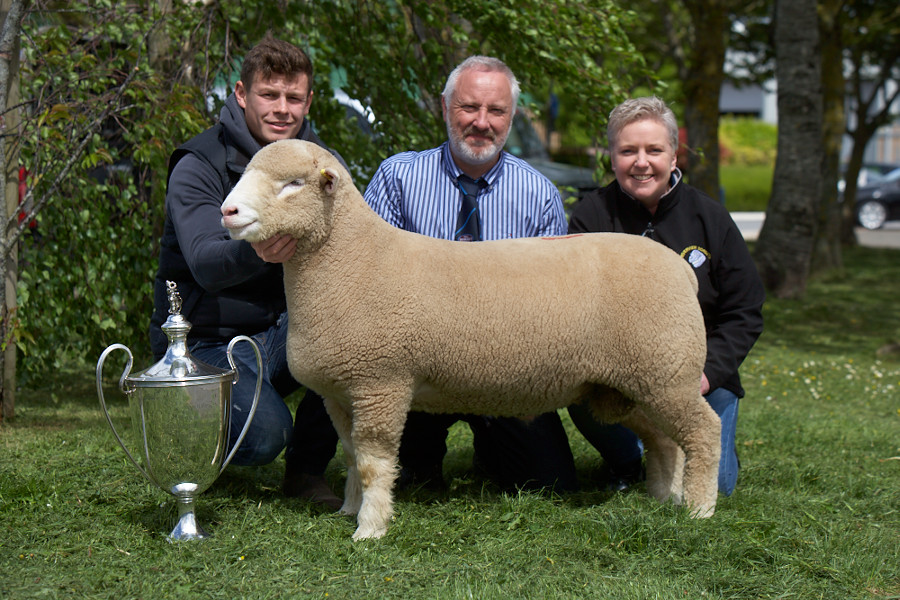 Pedigree females broke the record twice in the day with a pen of two six tooth ewes making £1,000 a head in the dispersal of the Rossiz flock for Ross and Emma Sizmur, of Higher Oatnell, Thorndon Cross, Okehampton, Devon, to Northern Ireland breeders Amy McConnel’s Beachmount flock in Temple
Patrick and William and Karen Carson’s Downkillybegs flock. 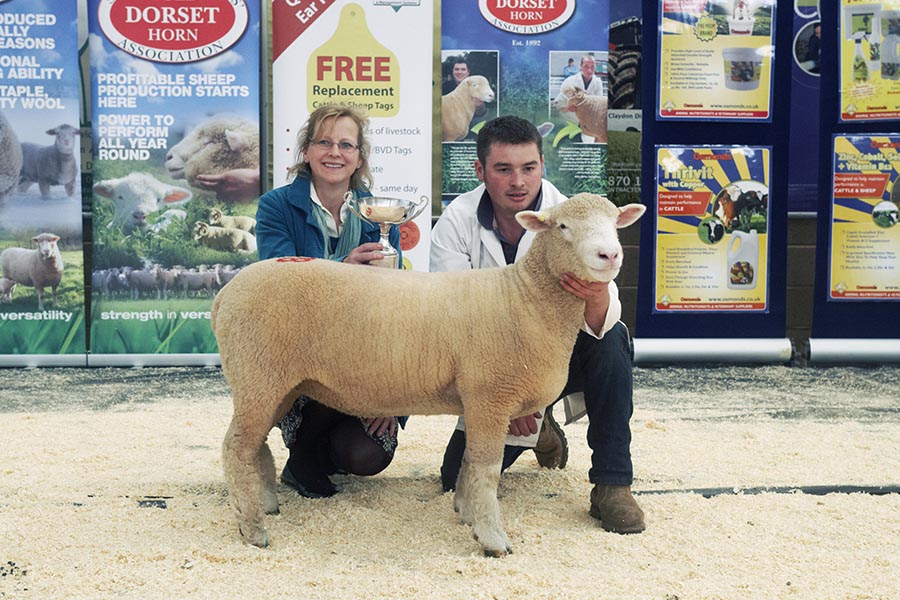 “The Dorset always had a very strong base in the south west of England but now the versatility of the breed to lamb at any time of the year is being
recognised across the UK.”

Kivells’ auctioneer Mark Davis, who shared the rostrum with Simon Alford, said: “The sale achieved some good top prices and breeders’ rams achieved their real value - this was despite a fall in prime lamb prices. Few have gone through the ring unsold.”

Attending the May Fair for only the fourth time with their sons Adam, 11, and Jason, 10, the Knox’s said their ram Riverview Wasabi had attracted a lot of interest back home. The September 2014 born ram is by Riverview Underarmour, the Welsh ram lamb in 2014, and his Riverview dam has been breeding quality twin lambs each year. Two years ago they sold another ram at the event for 3,000gns with Riverview Torque.

The 35 ewe flock was established 14 years ago and they have concentrated in recent years on improving the sheep through the muscling Myomax gene. They are currently running four Myomax rams.

Trevor farms the 230 ha family unit which runs commercial ewes and suckler cows and the pedigree Dorset flock is run separately with Sharon as an interest and both enjoy showing.

The ram’s grandsire was the high index ram, Blackhill Trevor, bred by purchasers of the top priced Wasabi, Jim and Joe Dufosee, Farnicombe Farm, Upton Scudamore, Warminster, Wiltshire, and it was in the top 1% of the breed.

Equalling the previous best of 3,000gns for the Sherborne flock, Rob Hole and his father Richard, of Hill Street, Sherborne, were delighted with their sale average of £1,143, despite being late in the sale schedule, which further adds to the 50th anniversary of the flock this year. 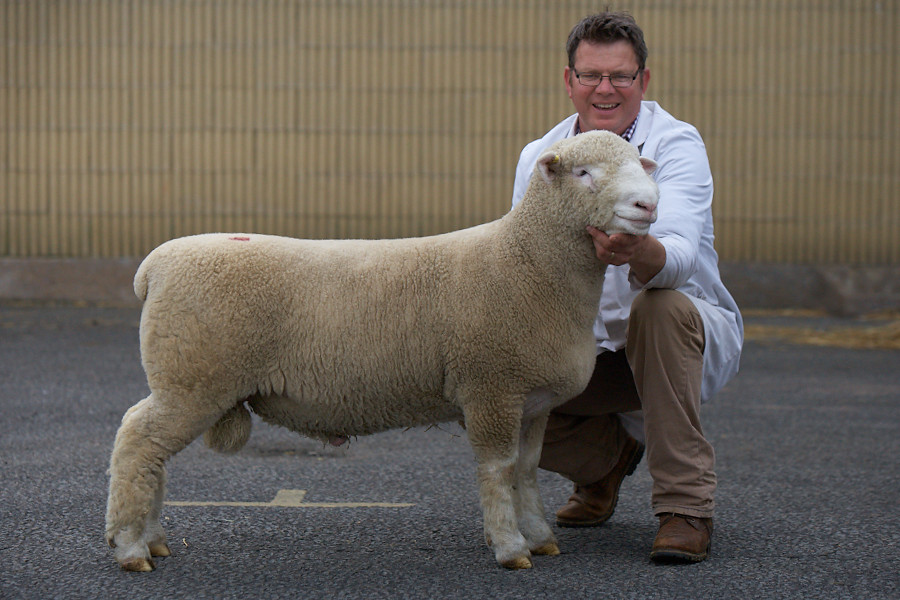 The ram, the September 2014 born Sherborne Wayfarer, was sold to Edwin and Jenny Pocock of Totley Hall Farm, Totley, Sheffield, who have given their Hall Lane Flock, which lambs in November-December and March-April a boost before its dispersal sale on October 7 at Exeter.

The ram will be running with the ewe lambs prior to the sale which will offer around 400 females, the majority of which will be in lamb.

The flock which runs at 600-900ft on the edge of the moors was established 12 years ago, since when Edwin has been a party to establishing the Chelford sale three years ago as well as the North of England Dorset Club, being its chairman for three years.

The couple who are retiring have focused their breeding policy on making genetic improvements to the flock and have had it Signet recorded as well as selecting for type.

They paid 4,500gns for the top Signet recorded ram Blackhill Trident two years ago at Exeter and they have since been awarded the EBLEX prize for the most genetically improved flock. It has a Terminal Sire Index of 350 compared with the bred average of 278 with a mothering ability EBV of 2.19 and 1.89 lambs born per ewe.

First was the September 2014 born Downkillybegs Wallaby, bought by Gill and Richard Trace who run 200 Signet recorded Poll Dorsets at Sheepwash in North West Devon which fits in well with their 90-acre - 23,000-tree cider orchard. 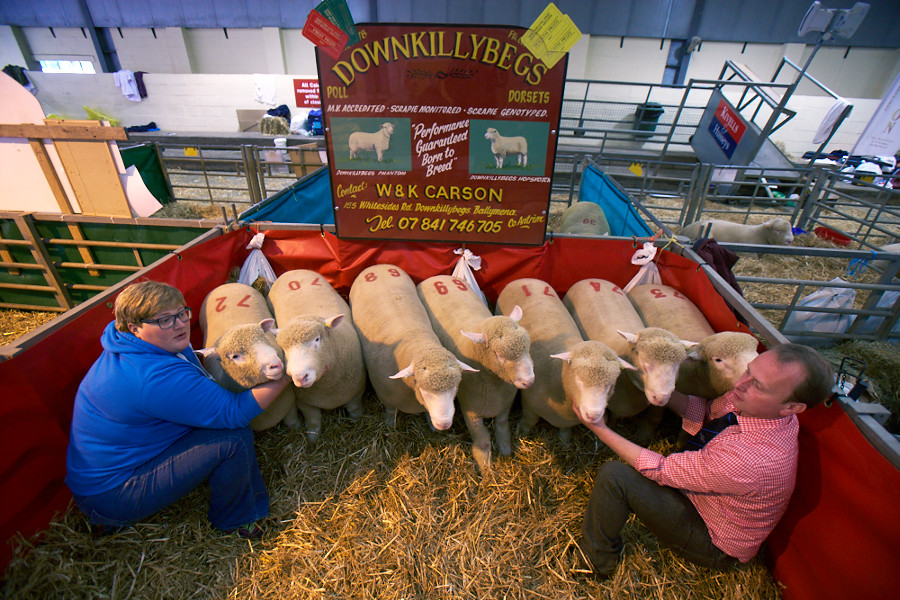 The ram is by Wilsey Panther out of a Downkillybegs dam which was full sister to the 2012 supreme champion and top price at the Norhern Ireland premier show and sale.

They also bought the top Signet ram Downkillybegs Wonderboy for 1,700gns for their Gortleigh flock.

Ewes are lambed in the last week in November to allow the apple harvest in the early autumn and lambs are sold to Waitrose. Pedigree rams and females are also sold, mainly from home.

“We lost all our sheep - 500 Dorsets and 600 commercial sheep - in 2001’s foot and mouth epidemic and we always like to run a number of rams. We have stuck to the Dorsets and we thought this ram was very correct and the other stands up with his figures,” said Gill.

Writing the cheque for the second 2,000gns to Downkillybegs, for Downkillybegs Wonka, was Liz Matthews for her 12 ewe Cornella flock in Bridgend.

Her husband David had been a Dorset enthusiast, buying his first Polls from Bunny Lenthall in Dorset more than half a century ago. While unable to manage the 200 ewes he ran, she wants to maintain the flock by buying good genetics and the ram’s Myomax muscling gene attracted her.

In memory of David, she set up a bursary to encourage young Dorset breeders. She is supported in the breed by her daughter Rhiannon Richards and her husband Philip David who bought the reserve champion ram for their Treoses flock. 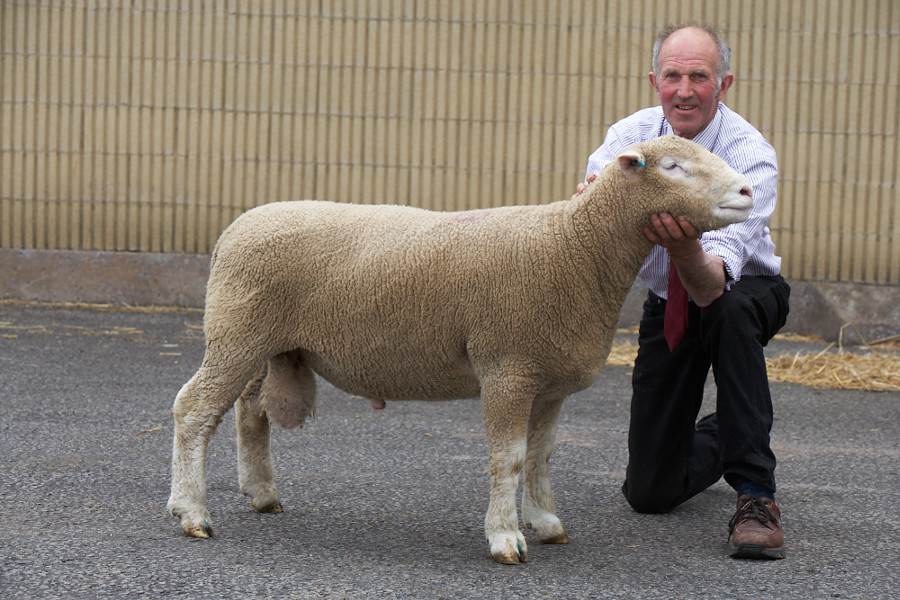 Les French with Wilsey U768

Selling at 1,800gns and achieving a flock best was from the Wilsey flock run by Les French, at Higher Scarsick, Treneglos, Launceston, Cornwall.

Purchasers were Trevor and Sharon Knox who said it was a strong sheep with a good carcase which they hoped would continue to improve their flock.

The March 2014 born ram is by Ballytaggart Sapphire out of a Wilsey ewe.

Mr French’s flock of 120 Poll Dorsets which he has been selling at the May Fair for the last 30 years and breeding for 40 years lamb principally in the spring with some in October-November to help conserve grass for grazing the 140- Friesian type Holstein dairy cows and silage making.

The Carsons also produced the next leading price ram making 1,750gns September 2014 born Wurzell by Wilsey Panther and out of a Myomax home bred ewe which sold to Messrs Brookin of Rhippinllwyd, Cwmcou, Newcastle Emlyn, Ceredigion. 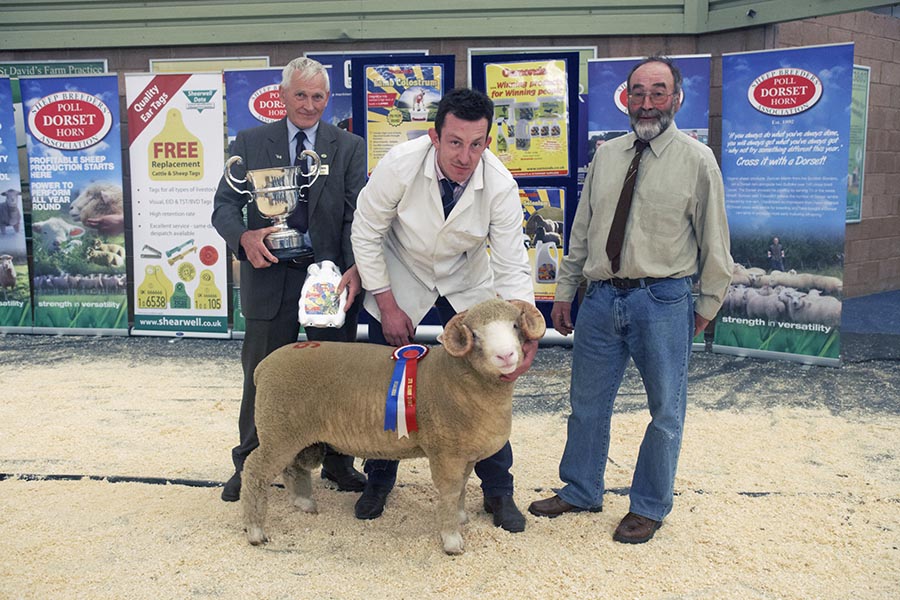 The dispersal for Ross and Emma Sizmur’s Rossiz flock saw 68 females and seven rams sold. The flock was sold after 10 years to concentrate on their commercial 650 ewe flock and suckler herd. It has won the society’s flock competition twice.