STEADY DEMAND FOR PEDIGREES AND COMMERCIALS AT DORSET MAY FAIR

The Dorset May Fair in Exeter on Wednesday (May 4) saw a steady demand for commercial rams and ewes while quality breeders’ rams matched and females topped previous years’ levels.

Conducted by Kivells in Exeter Livestock Centre on behalf of the Dorset Horn and Poll Dorset Sheep Breeders’ Association, the sale saw well over 2,000 pedigree and commercial breeding sheep sold.

Accredited ewes averaged £89.32 for 22 sold while ewe lambs and hoggets levelled at £170.00 for 359 sold. A total of 2,278 pedigree accredited and non-accredited and commercial breeding rams and females went under the hammer.

With a top price of 3,000gns for the reserve champion from the previous day’s show from David Rossiter’s Huish flock at Galmpton, Kingsbridge, Devon, a total of 19 rams made 1,000gns and more.

The individual female breed record was broken by Northern Ireland breeder Thomas Wright at 2,000gns for a home-bred ewe lamb.

Association chairman and Northern Ireland breeder Ben Lamb, who had the sale’s third top price, said: “All in all, with the farming industry as it is, I think it was a very positive sale. A strong commercial trade underpinned the breeders’ rams sales in what was a bigger catalogue of sheep.”

Kivells’ auctioneer Russell Steer said there was a strong trade for the best of females. “Buyers were from a few new flocks looking to buy females, which is always good. Trade was good on the back of a weaker barren ewe trade.”

One of the worst winters for a number of seasons had prevented breeders turning out as good a quality of rams, said Kivells’ Simon Alford. “We have had an atrocious winter for a forage breed which likes to be on grass. The top 25% of rams sold well and more of this quality could have been sold. Sheep were sold to all corners of the UK.” 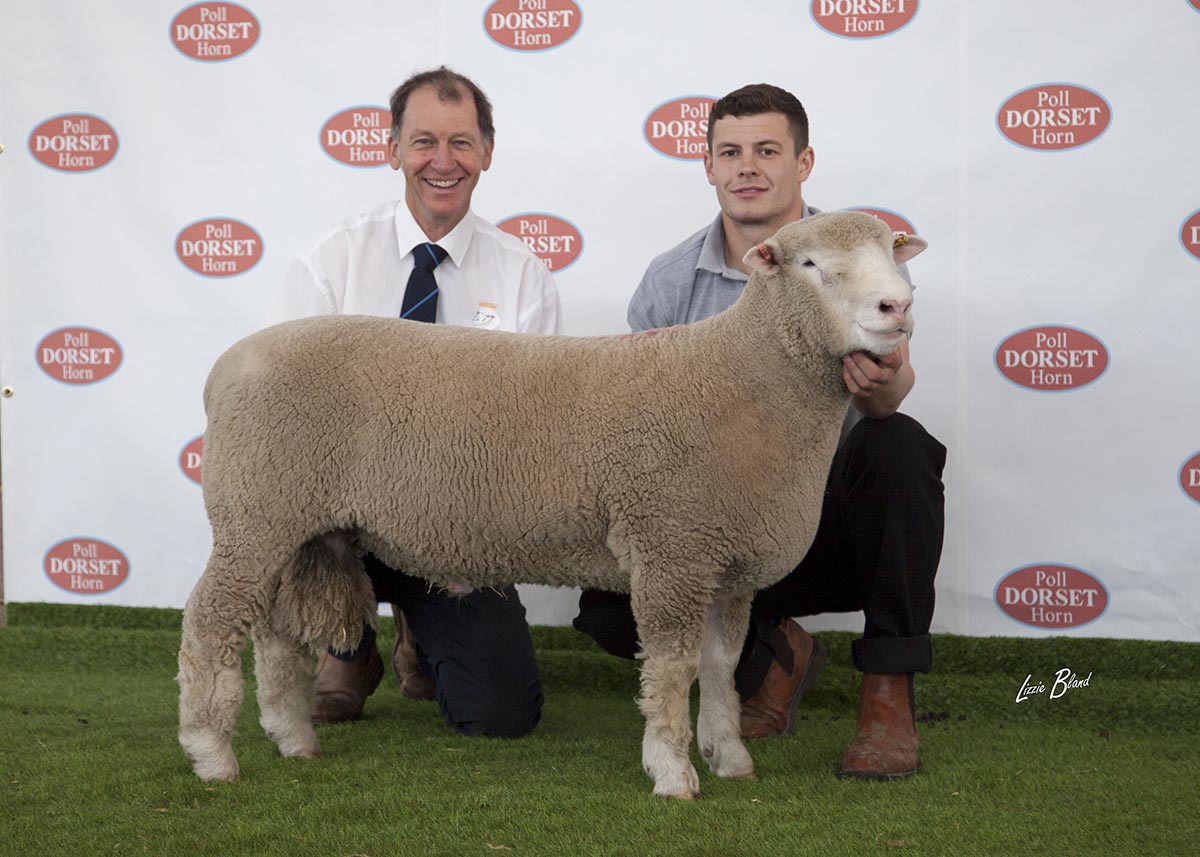 Leading the day’s prices was the September 2015 born Poll ram lamb Huish Exhilarate from David Rossiter. Its sire Downkillybegs Unique, a double copy Myomax ram, has passed one copy of the double muscling gene to his son which is out of a home-bred ewe from the 520 ewe Huish flock.

Mr Rossiter is an advocate of using DNA markers which he believes will become increasingly important for future step breeding, selecting not only for health and performance, but the early lambing capabilities which the Dorset is renowned for.

Purchasing the leading priced ram was father and son Jim and Joe Dufosee for their 400-ewe Blackhill flock which is run on an organic system alongside 200 Aberdeen Angus suckler cows, run on an organic system on Salisbury Plain. They paid the top price of 3,100gns at the 2015 May Fair for Riverview Wasabi from Northern Ireland breeders Sharon and Trevor Knox.

“Joe and I select the 10 rams we like before the pre-sale show,” said Jim, who farms with his son at Farnicombe Farm, Upton Scudamore, Warminster, Wiltshire. “David’s ram had good figures, which is important to us.

“He is also a scopey ram as well as being correct and he has the Myomax gene breeding through Ballytaggart Puma,” added Jim, who said the ram would be out to work immediately after the sale. 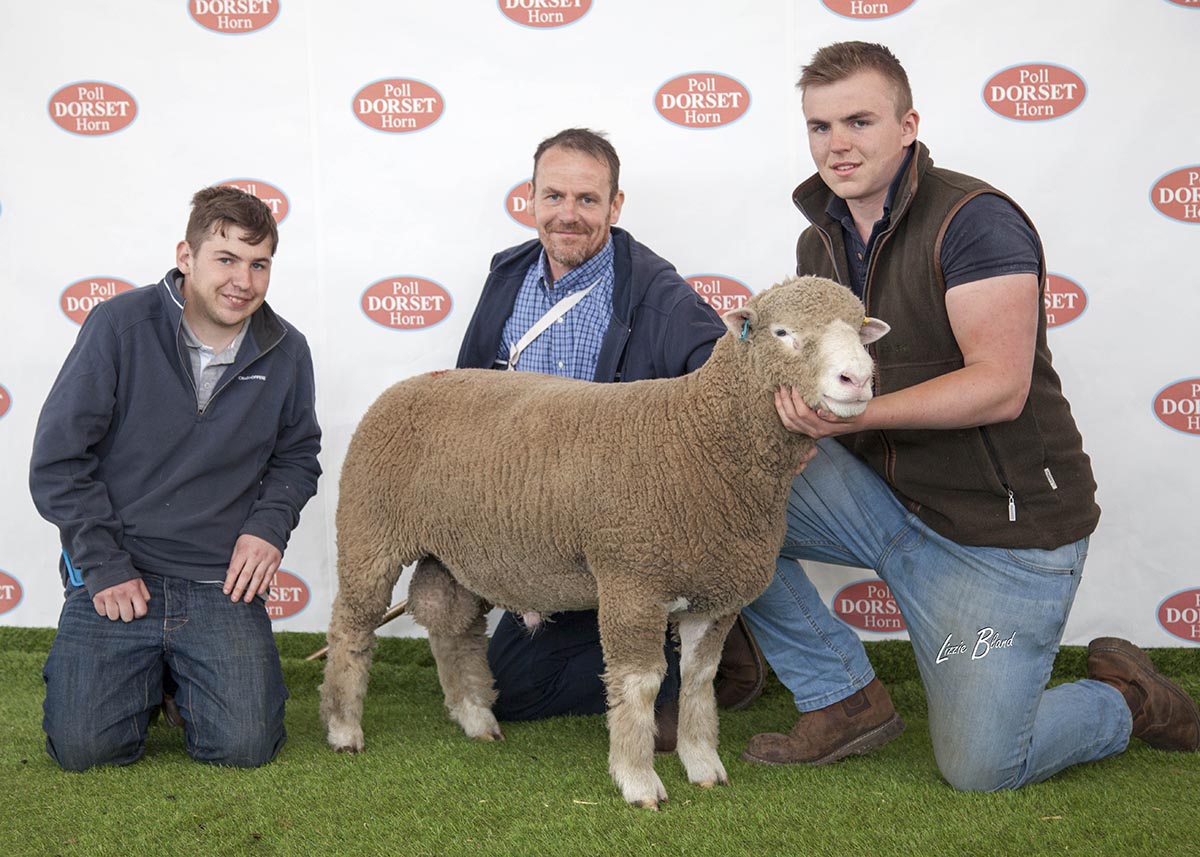 Next in the the price order but selling early on in the catalogue was Deverill Xavi a September born Poll ram from Adrian Dufosee which made 2,600gns to William and Karen Carson, of Northern Ireland.

The ram would not have made the sale had it not been for Adrian’s sons who work on the family farm Church Farm Longbridge Deverill, Warminster, as Adrian broke his wrist before the May Fair.

Adrian paid 800gns for the ram’s sire, Oliver Tree Uncle Ben, two years ago. The ram is out of a home bred ewe.

Sons Harley, 22, and Grady, 19, turned out and showed the ram to achieve the flock’s highest price - previous best was 800gns for the flock which dates back to 1988 and is run alongside other pedigree sheep. Currently, 250 of the Dorset flock is polled with 50 Dorset horned ewes. Dorsets make up half the pedigree ewe flock and 200 cattle are finished a year.

William Carson, who bought the ram for his Downkillybegs flock in Antrim, Northern Ireland, said: “We liked the ram’s character and presence. The ram is very much true to breed character and type.”

William and his wife Karen and son Cameron have a flock of 350 ewes, of which 200 are Poll Dorsets. William has been secretary of the Northern Ireland Dorset club for the last 25 years during which time the breed’s popularity there has grown to such a degree that now a third of the association’s membership comes from the province, running a total of 4,500 registered pedigree ewes.

“The Dorset is playing a stronger role in the commercial market in Northern Ireland because of its early lambing ability,” said William. The ram will go out to work immediately with the ewes to produce lambs in early October. 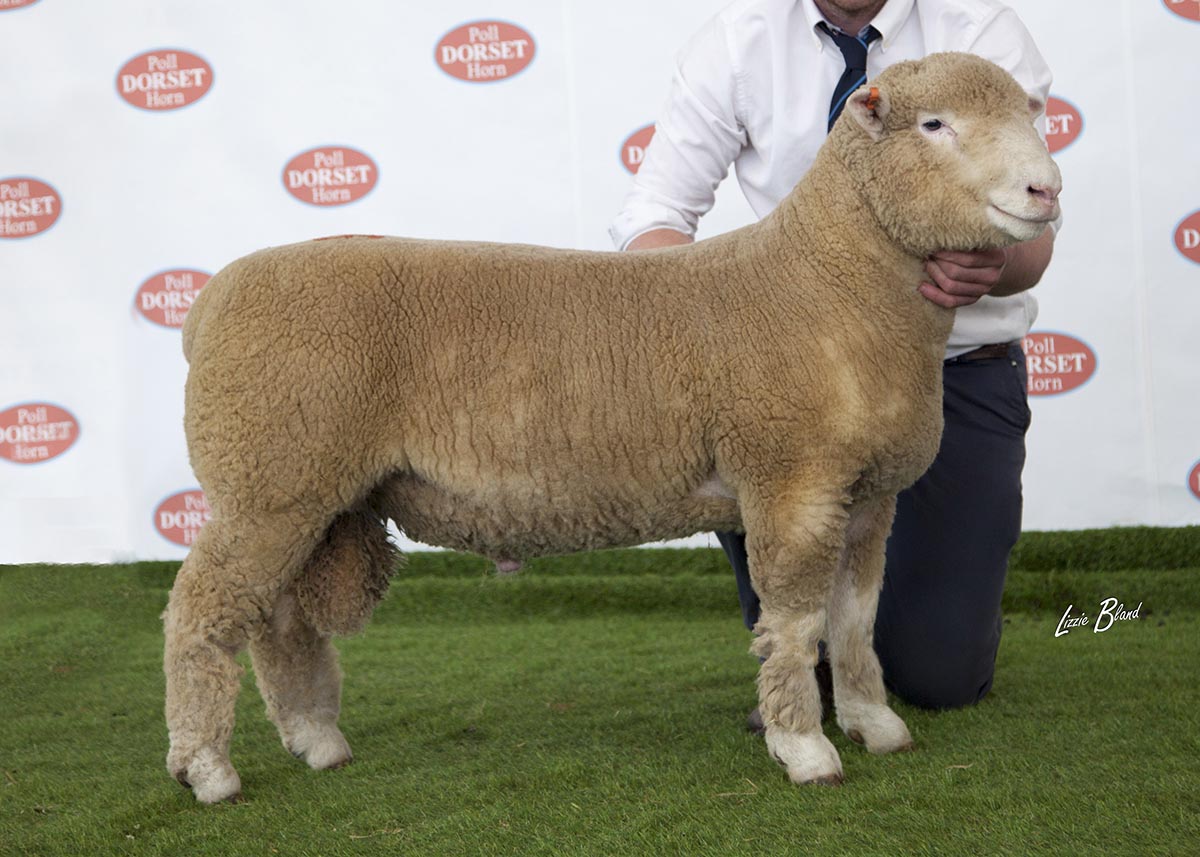 The October born Richhill Xstyle is by Sandelford Usain, which made the top price at Northern Ireland Premier Sale in July two years ago at £900.

Buyer was fellow Northern Ireland breeder Thomas Wright who liked the ram’s breeding. Both breeders have started Signet recording their flocks this year.

Keen to maintain the traditional side of the breed he started with, Ben runs 20 horned ewes alongside 58 polled sheep alongside his father’s 45 pedigree Aberdeen Angus cows, 12 pedigree Texels owned by his brother Peter and arable land. Ben also works as contracts manager for facilities management in schools in Northern Ireland. 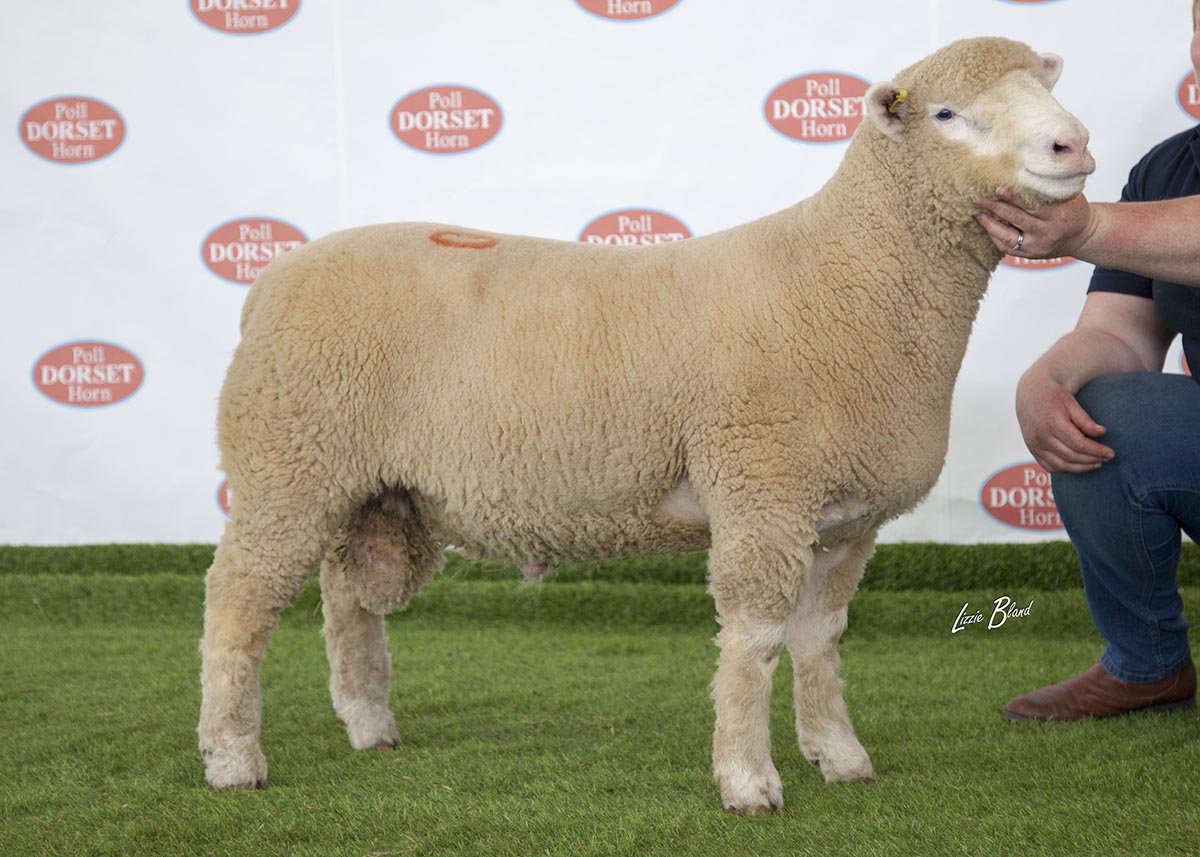 David Rossiter paid 1,600gns for William and Karen Carson’s Downkillybegs Xaco, born in September 2015, to add to his stock rams at Huish.

The ram lamb’s terminal sire and maternal index are both in the top 1% of the breed. By Downkillybegs Umberto, the ram is out of a home bred ewe.

“He has perfect figures not only in in his terminal potential but also his strong maternal index. The ram has scale and scope,” said David. 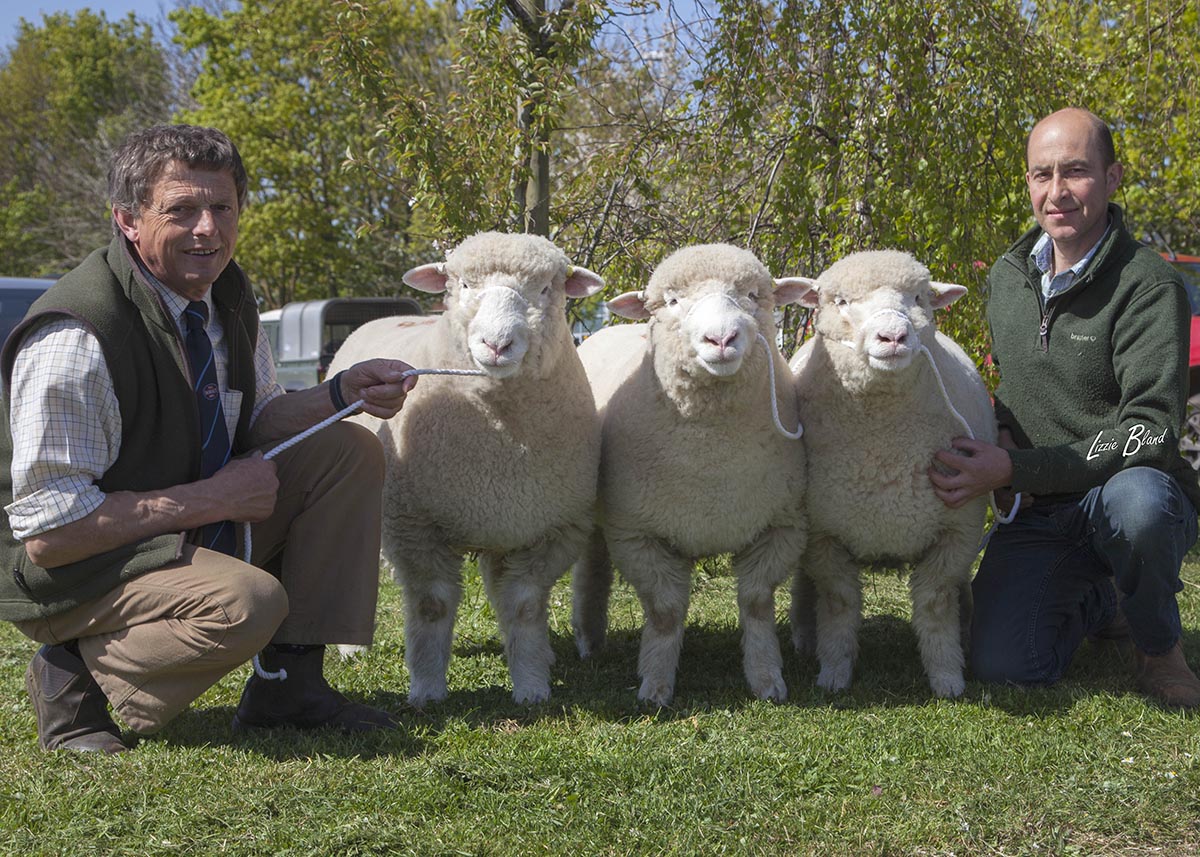 The overall champion of the pre-sale show selected by judge Richard Hole of the Sherborne flock in Dorset was a pen of three rams from Fooks Bros, Manor Farm, North Poorton, Bridport, Dorset.

The pen, all September 2015 born and sired by Beechmount Tweedledum and out of home bred rams, averaged £549 a head.

Showing the sheep from the 110 year old Poorton flock were Francis Fooks and his partner Carol Puttock with Francis’ nephew Matthew Bagwell on behalf of the family mixed dairy, beef and sheep enterprise which includes 210 Dorset ewes, a third of which are horned, run with brothers Michael, David and Jeffrey.

The Fooks showed the champion female which went to a horned ewe for the first time, the September born Poorton Warbler, by Poorton N141, out of a home bred ewe, sold for 620gns to B A Wernham & Son, of Newbury, Berkshire.

In the commercial pens, the Fooks’ pen of five Poll ewe hoggets made £390 a head to top that section of the sale. 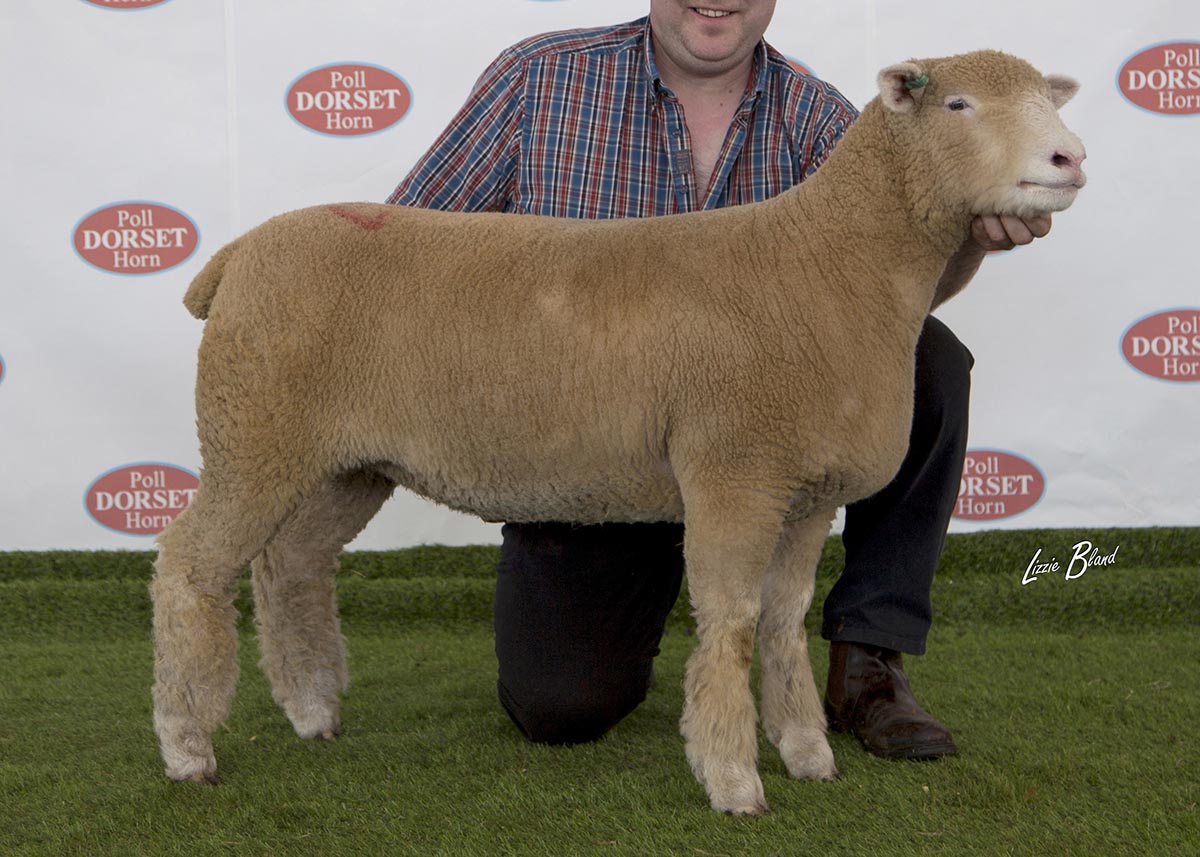 Thomas Wright also had the champion pen of females in the commercial section which made £300 a head to give his Ballytaggart flock a boost in its 25th year.
Among the volume buyers and a first time purchaser making a more than 600 mile journey to the May Fair sale was committed Dorset breeder Dean Anderson, from Smallburn Farms, Mayne Farm, Elgin, Morayshire.