The Dorset Horn and Poll Dorset sheep breeders had a record breaking day in the ram sale ring at their annual May Fair in Exeter with the overall Champion setting a new breed national record of 6,800gns, for brothers Matthew & Adam Care of Lower Lydcott Farm, Looe, Cornwall who had an exceptional pen of shearling rams that were duly rewarded with rosettes in the presale show and solid prices in the sale ring.

Having won first prizes in not only the single polled shearling class, pair of polled shearlings but also the group of three, they had to exhibit six of their seven rams into the Championship line up and claimed overall victory with lot 110, the single shearling ram class winner Burhos Drambuie, D1340, who was the first progeny to be offered for sale by their aptly named stock ram Pembroke Cornish Pirate and out of a homebred ewe sired by Burhos X-type, after frenzied bidding he heads home to join the Dynamite flock in Bolton with Richard Fitton. The Cares had two others over £2000 with the truly homebred lot 108 Burhos Dynamite sired by Burhos Chief sailing to 2200gns purchased by the current breed president and presale Championship judge Roger Elliot of Northamptonshire.
Lot 107 Burhos Destructor realised 2000gns with this Burhos Zebedee sired shearling catching the eye of its new owner, Chris Davis of East Sussex. 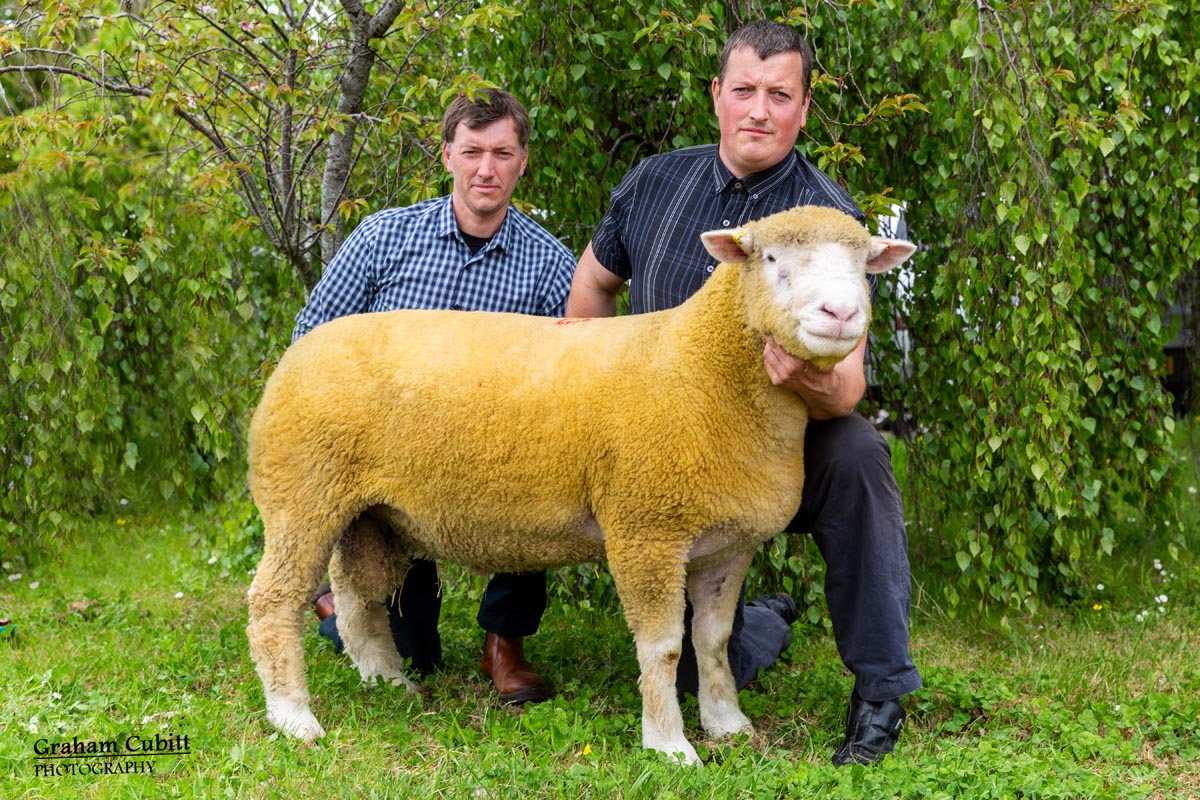 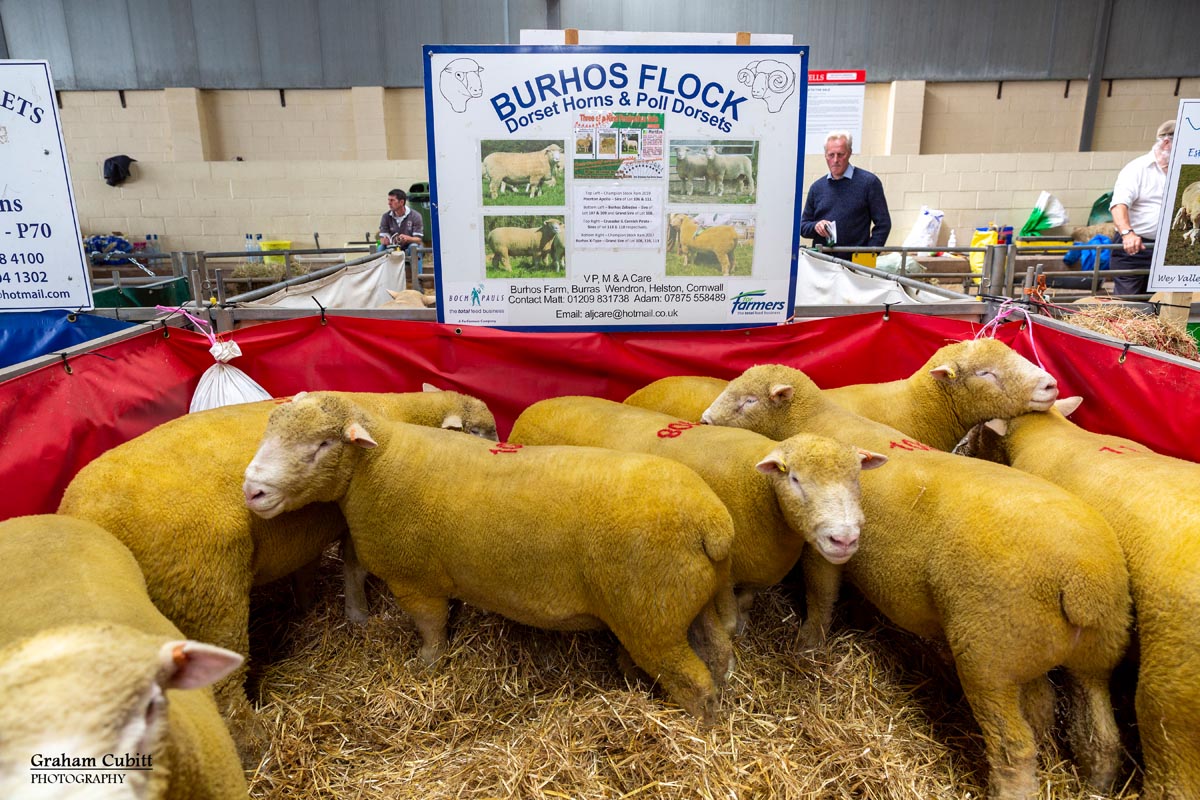 Thomas Wright came across the Irish sea from County Antrim with a notable pen of lambs from his Ballytaggart flock to see three selling in excess of 2000gns and two of those over £4k. Top money here of 4200gns went to “Emoji” a Downkillybegs Daredevil sired lamb that was snapped up by regular buyer at this sale Henry Tickler of Grantham, Lincolnshire whilst lot 24 Ballytaggart Enzo stayed in the Westcountry with Les & Heather French of Launceston to join their Wilsey flock following a call of 4000gns and a bid of 2800gns secured Ballytaggart Ezra for S Smith of Derbyshire.

In an all Devon transaction Richard & David Rossiter of Kingsbridge, attained 3400gns for Huish Envoy with the winning bidders being Mark Hayman & Abi Dart of Bradninch and then Richard & David reinvested 3000gns of it in Downkillybegs Eagle Eye from William & Karen Carson also across from County Antrim. 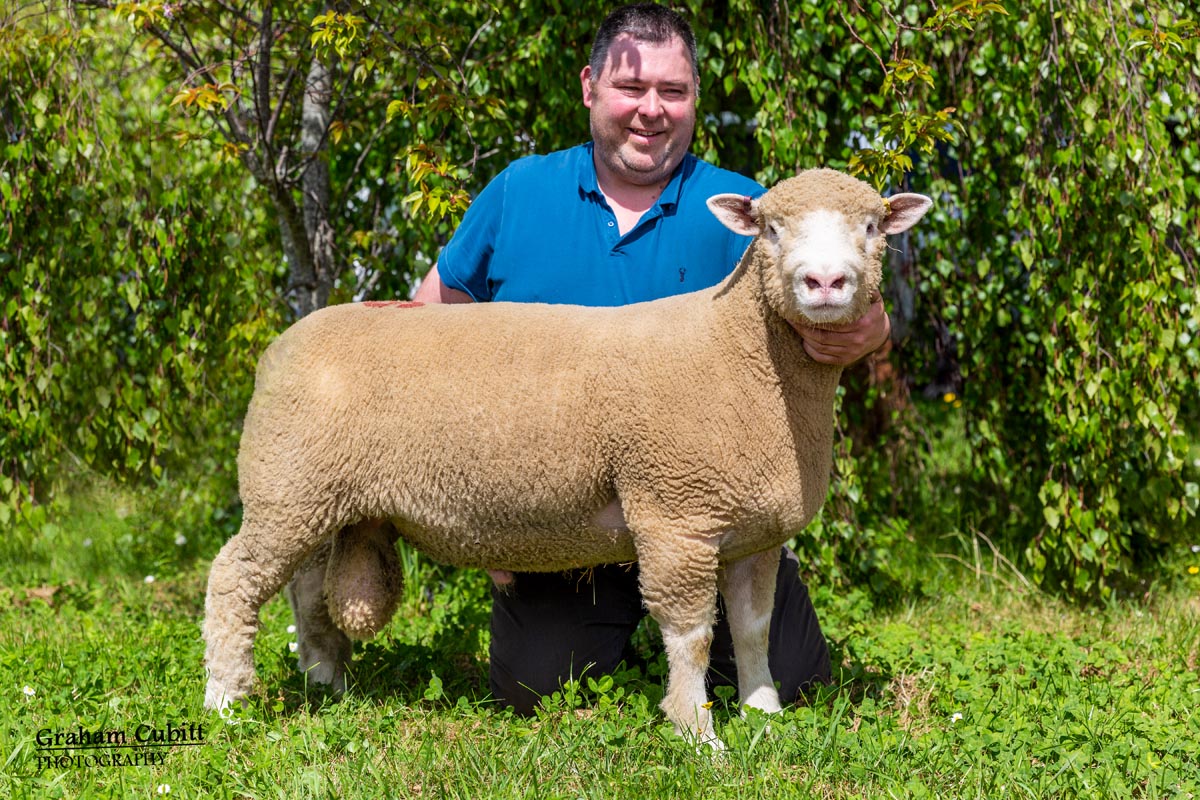 David Lewis of Pembrokeshire had a top price of 2800gns for the pick of his pen Pembroke Example, given by Andrew Kennedy of Ballymena and Les & Heather French made the same figure of Wilsey Distinguished which heads home to Hydes Farming in Essex care of Jeremy Durrant. Ben Lamb of County Armagh deemed the trip a success when Tim Pratt of Suffolk gave him 2500gns for lot 97 the Richhill Bashful sired Richhill Eddy and James Royan of Berwickshire flew the flag for Scotland when his lamb Bennachie Edradour climbed to 2000gns bought by K O’Connell of Bantry, County Cork. 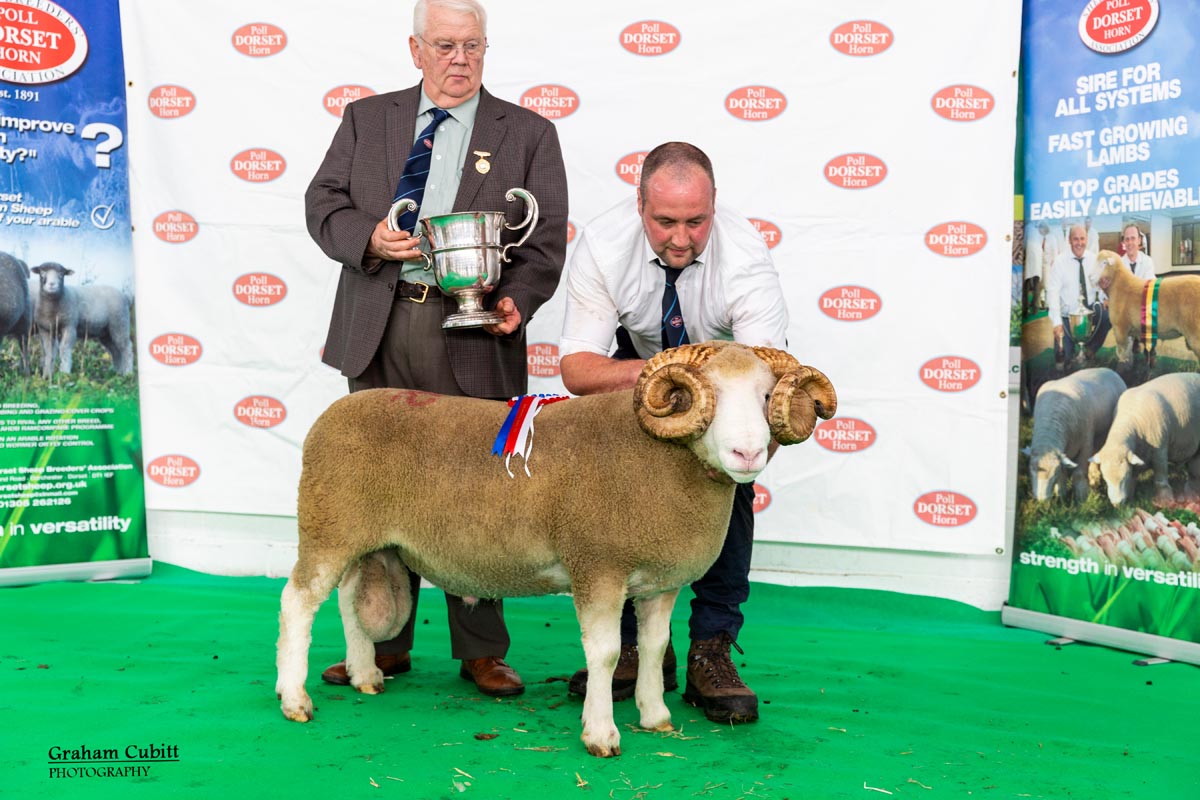 In the female side the sale kicked off with the MV accredited and pedigree females and the first of these were a run of scrapie monitored negative hoggets from Fooks Bros of Bridport who also claimed first prize pen of hoggets and overall Champion pen of females. These were the first lot of the day to be offered and sailed to 380gns with others from the Poorton flock selling at 300gns. Individual females rose to 480gns for David Lewis of Pembrokeshire who also exhibited the Champion female who remained unsold as Robert & Richard Hole of Sherborne sold their best individual shearling for 450gns and Tim Pratt of Suffolk sold his best lamb at 420gns. 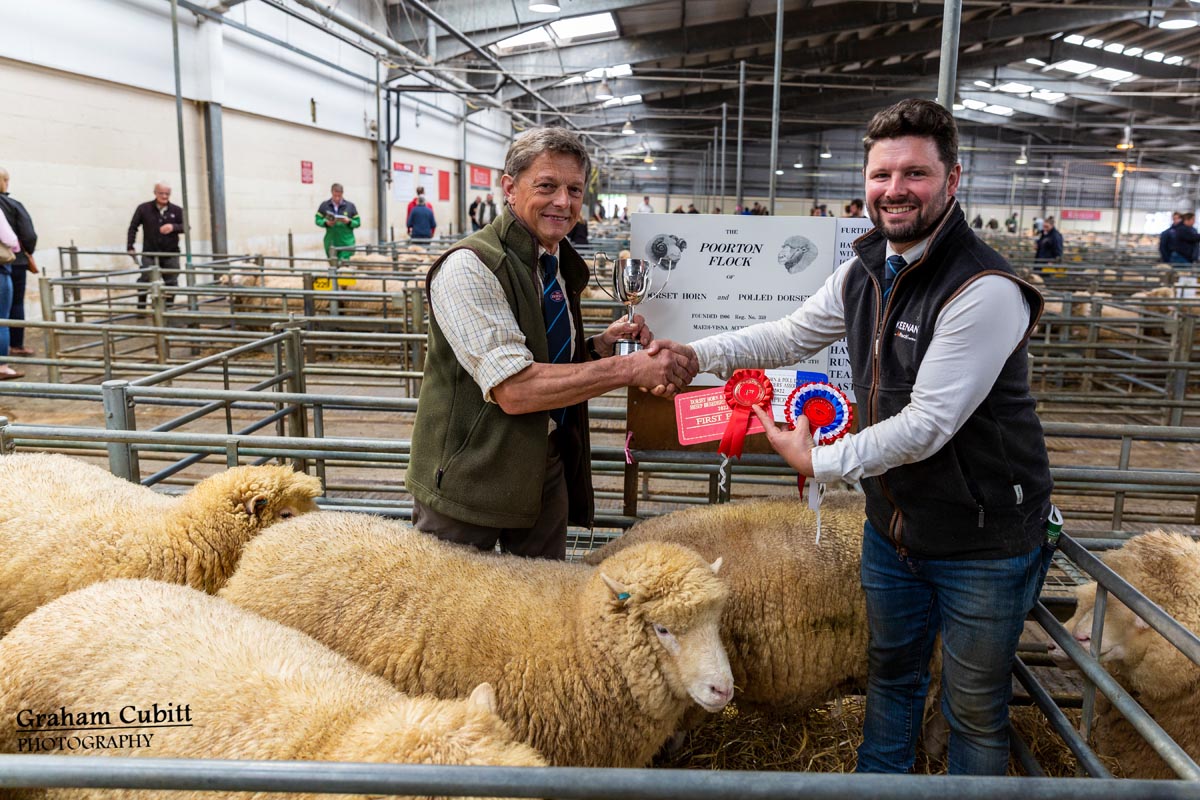 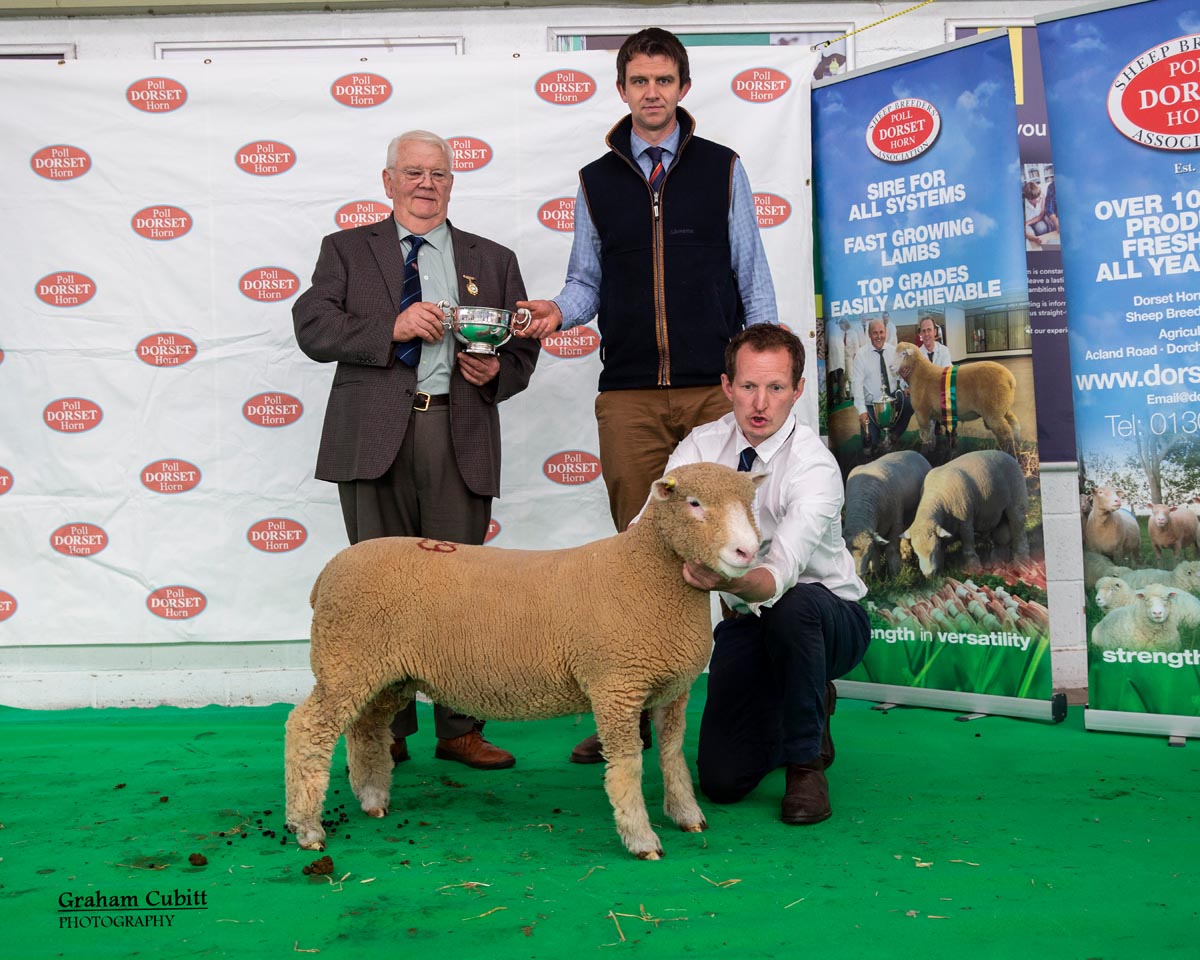 “In the registered non mv section this year trade was £10-£15 less than the flyer seen here last year, particularly for the best” reports Kivells lead sheep auctioneer Russell Steer who adds “those that were £210 to £220 last year were either side of £200 today, topping at £208 for three pens from the stand out run from S & D Cole of Torrington who sold another two pens at £205 and others at £198 and £195.”

Purebred hoggets were in line with this developing trend of breeders being just slightly less on last year, however not such a big gap here as with the pedigree’s. Messrs MJ & DM Lake of South Molton actually averaged 20p more of their fine purebred hoggets this year levelling at £208.20 with pens at £225, £218 (x2) & £198 whilst Gareth & Jess Hutchings of Launceston sold their two pens at £200 and Ivor Prouse of Holsworthy reached £198 with the best of his few pens. “Lots of good farming hoggets trading from £175 to £195 whilst lesser sorts were no less on the year and pretty much all £155 plus,” added Mr Steer.

Older pure bred ewes sold to £195 for one crop ewes from Devon Farming of Bratton Fleming who also had 2 crop ewes at £170 twice and Andrew Palk of Paignton sold pens of powerful flock aged ewes to £188 (x2) and £182 (x4). A selection of varying Dorset crosses were in keen demand too with Mervyn Brice of Stoodleigh selling an eye catching run of Berrichon cross shearlings at £212 & £205 (x3) and Dorset x Mules sold to £180 (x2) & £170 for Robert Partridge of Teignmouth.