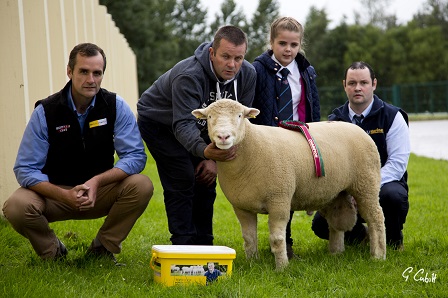 This Show & Sale, still relatively new to Omagh, attracted an entry of 88 pedigree sheep, and the continuing popularity of the Breed was reflected in the interest shown by the large turnout of people interested in establishing a Dorset Flock or indeed adding to their existing Pedigree Flock. It can be said at the outset that the N I Dorset Club Committee was very pleased with the interest that this event has attracted and it is anticipated that its importance in the Dorset Sales Calendar will grow and develop year on year.

The earlier part of the day was given over to the judging of the five different Classes and this was ably accomplished by Judge Mr Seamus Mullan of the Islaharnan Flock, Armoy. There was keen competition amongst the exhibitors in the various Classes which saw strong entries in both the Ram Lamb and Ewe Lamb Classes.

Following careful consideration the Judge found his Supreme Champion in a strong Shearling Ram from the Bannside flock of Rachel Moore. This well formed ram was sired by Sandleford Thunder off a Bendorragh dam and he later went on to sell for 450 guineas, being purchased by Mr Grey, Ballinamallard. 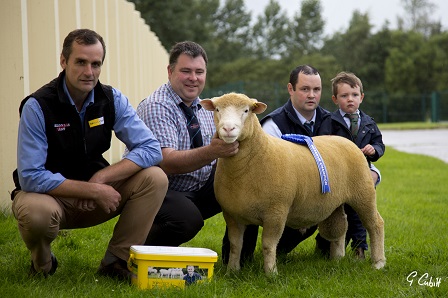 The top price of the sale was achieved by the Reserve Champion, an outstanding ram lamb bred by Thomas Wright of the noted Ballytaggart Flock. This superbly bred lamb, sired by Ballytaggart Tonka, went on to sell for 720 gns having been purchased by A Reid, Fintona.

Top priced female of the Sale went to an eye catching ewe lamb from the pen of J & C Robson of the Ballyhamage Flock. This fine Manor Croft Utopia offering selling for 320 gns was knocked down to M Keys of the Rathwarren Flock, Fintona.

There was a high clearance of Sales in all Classes, with females in particular being in strong demand, and Sale Averages were: