Let us Generate Opportunity from Crisis

‘Mr Watson – come here – I want to see you’, were the famous first words uttered by Alexander Graham Bell to his assistant when he invented the telephone in 1875. By the 1930’s the household telephone was commonplace in affluent homes and only 20 years later it had become a standard household item.

Where would we have been without the telephone over the last 70 years? I am sure we all regularly pick up the phone to loved ones, fellow Dorset breeders and (of course) Marg Cowley our famous Breed Secretary when struggling with the Grassroots system! Over the last 70 years hundreds, if not thousands, of Dorset ewes and rams will have been traded over the phone.

“What”, I hear you ask, “is James Royan prattling on about this time”!

In the 1950’s the vast majority of sheep were traded through livestock markets or in person, followed by a firm shake of the hand. It would have been unthinkable to ‘do a deal’ without seeing the colour of the buyer’s eyes. But times move on, approaches change, and sheep producers have learned to trust remote buyers over the phone.

But progress can take time and is often intergenerational, with sons and daughters feeling more empowered to ‘do things differently’. Or, progress can be forced upon us by external influences or national crisis.

No one can deny that 2019 and the uncertainty of Brexit has been unsettling to the economy, but few could have anticipated the impact of COVID19 on all walks of life in 2020. Selfisolation, social distancing and lockdown are terms familiar to us all but how have we reacted and adapted commercially?

If ever there was a time to look at alternative approaches and to allow ‘progress’ to be forced upon us, it is now!

Open mindedness and technology have been at the forefront of several sales of breeding stock over the past 12 weeks, which has been obvious when monitoring the frantic social media activity. Breeders taking the ‘ram by the horns’ and promoting their stock via Instagram or Facebook have been rewarded, with one breeder reporting the sale of 14 ram lambs already.

Strong images appear to be the corner stone of many of the sales, enhanced further by short video clips – perhaps not quite the same as laying your hand on the sheep’s back or running your thumb over its teeth but not far short.

The imagery that is supported by concise and accurate information seems to have worked well – pedigree information and the achievements of sires and dams have helped considerably.

For those breeders that record their stock through the Signet scheme, estimated breeding values and indexes have given buyers confidence in the genetic potential of the stock being offered, provided this data is supported with the pictures and videos mentioned previously.

If sheep can be traded to and from England, Scotland, Wales and Northern Ireland through these mediums, in a year with such significant economic instability, then are we changing our approaches permanently and is ‘progress’ being made?

No one can deny that the excitement, ‘cut and thrust’ and social opportunities that the society and club sales bring will be sorely missed this year. ‘Progress’ should never be at the expense of the fun, laughter and commercial opportunities that are enjoyed by all Dorset breeders at these events. But in a year when this is not possible (or at the very least limited) we must not allow the viability of our businesses to falter.

To their credit, many of the markets who have supported the Association over the years are exploring alternative approaches to selling stock, through on-line, timed auctions or heavily controlled sale days. We all hope to be back around the ring soon but COVID19 has taught us that if we innovate and take ownership of our own marketing there is a strong demand out there to exploit. 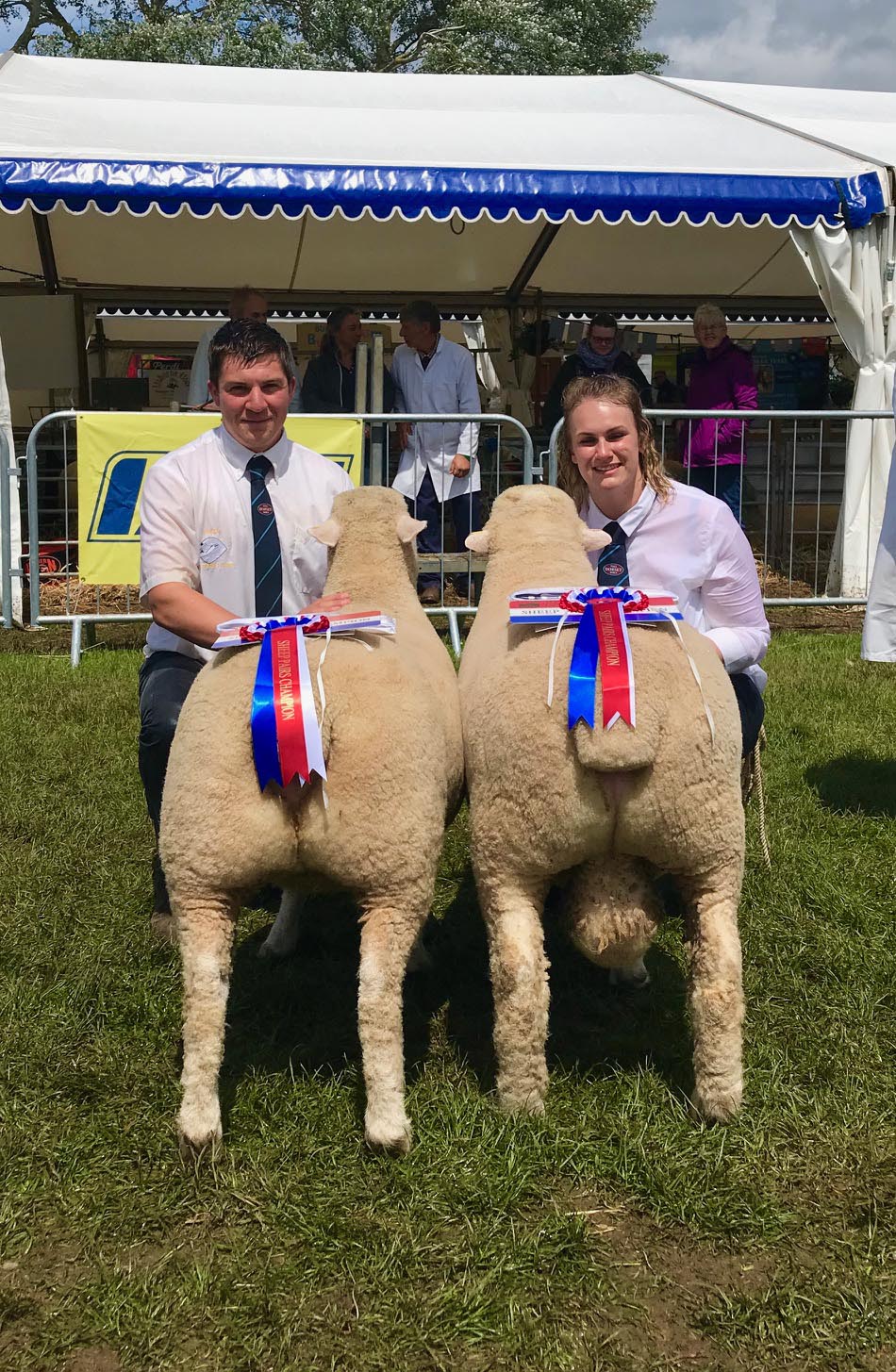 David and Rich Rossiter have always been strong supporters of the show circuit, spending many hours preparing, transporting, and exhibiting their stock in the public eye. They both firmly believe that this investment in time and effort has provided significant dividend this year. Rich commented “taking your sheep to shows and society events is free advertising as you never know who is looking around the pens or standing at the side of the show ring. Letting people see the quality of the stock we produce at these events has given new and old customers confidence in the direction we continue to take our sheep”. Coupled with an enthusiasm to show sheep, father and son are advocates of the Signet recording system. David said “we used social media to display images and videos of our stock but having the figures to back visual appearance means buyers have much greater confidence in what they are looking at. We can help potential customers choose the right ram for their specific needs, whether that is to breed female replacements or produce prime lambs”. 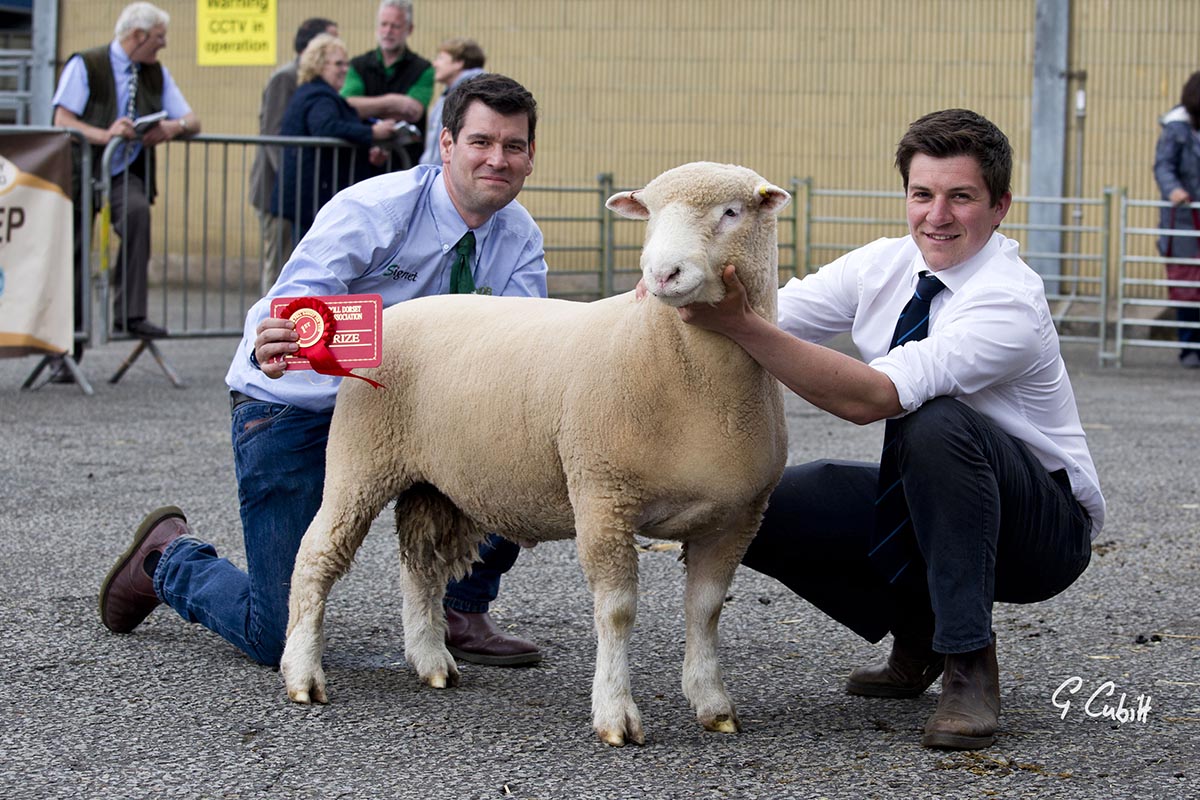 Reputation and a strong base of repeat customers has helped Northern Ireland breeder Thomas Wright ‘ride the COVID19 storm’. Tommy was quick to point out “over recent years I have tried to balance success in the show ring with a desire to look for new and different breeding lines to keep my flock fresh and appealing to repeat customers. There is no point in using the same pedigree line over and over again, as customers will quickly look elsewhere for their next new ram”. 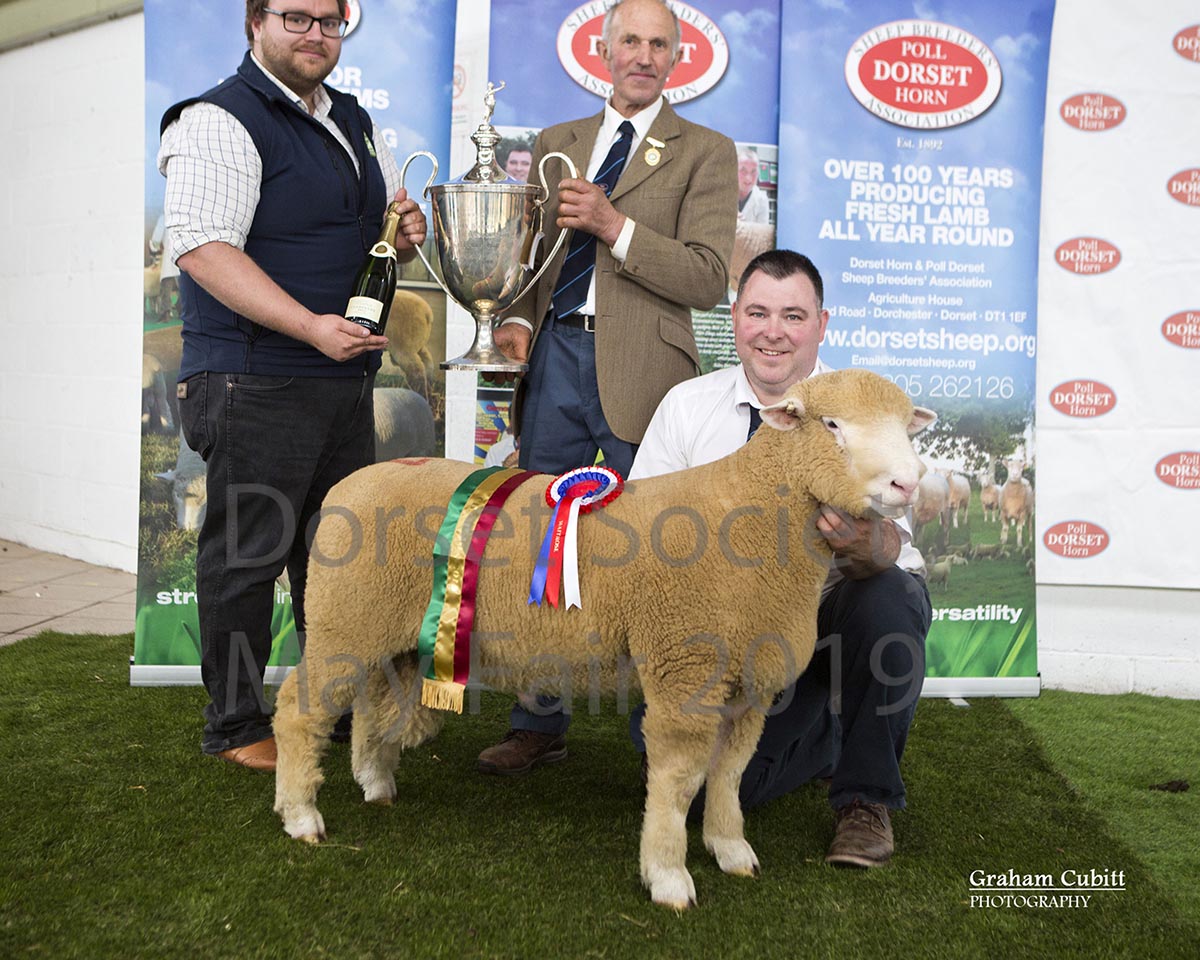 One younger breeder who has made giant steps over recent years is Sam Driver, based at Sandy Lane, Derbyshire. Sam is a strong advocate of social media in promoting the many breeds he produces but it is the Dorsets where the greatest gains have been made this year. “I set up Sandy Lane Pedigree Livestock on Facebook a couple of years ago and have established a strong group of followers. I make sure that I take good quality pictures but it is the videos that often have the biggest impact – people like to see how the animal moves”, said Sam. “Most of my photos are taken with my phone, which is always in my pocket. My advice to other breeders’ is don’t rush your daily rounds as you never know when that million dollar photo is going to present itself”. Sam has also had some success buying stock via social media this year with purchases arriving from Scotland, England, Ireland and Wales. “In the same way that I use videos to promote my own stock, seeing the lambs moving is what has sealed the deal in securing most of my new rams”. 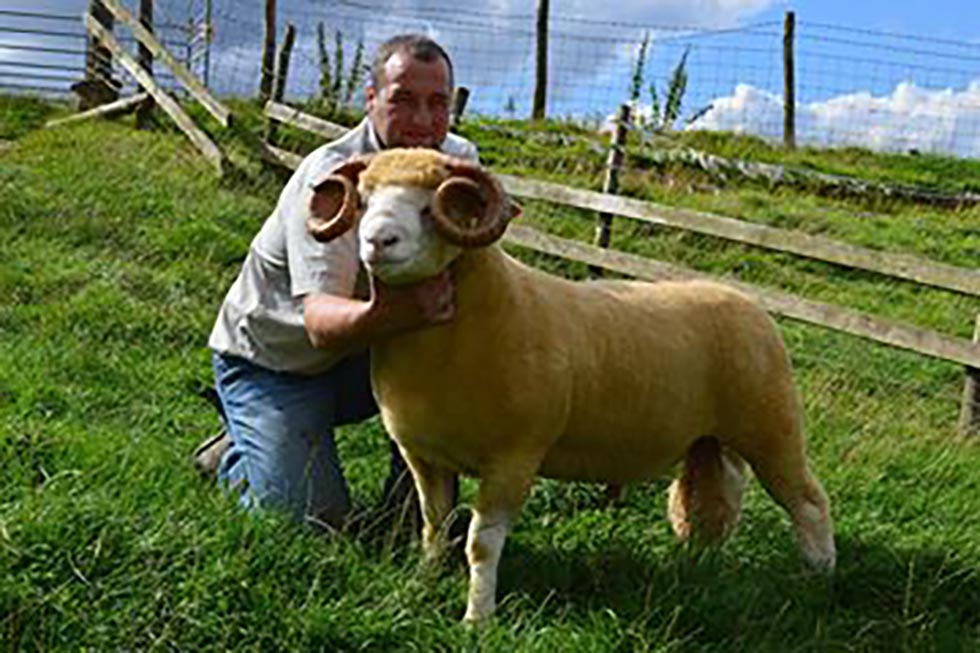 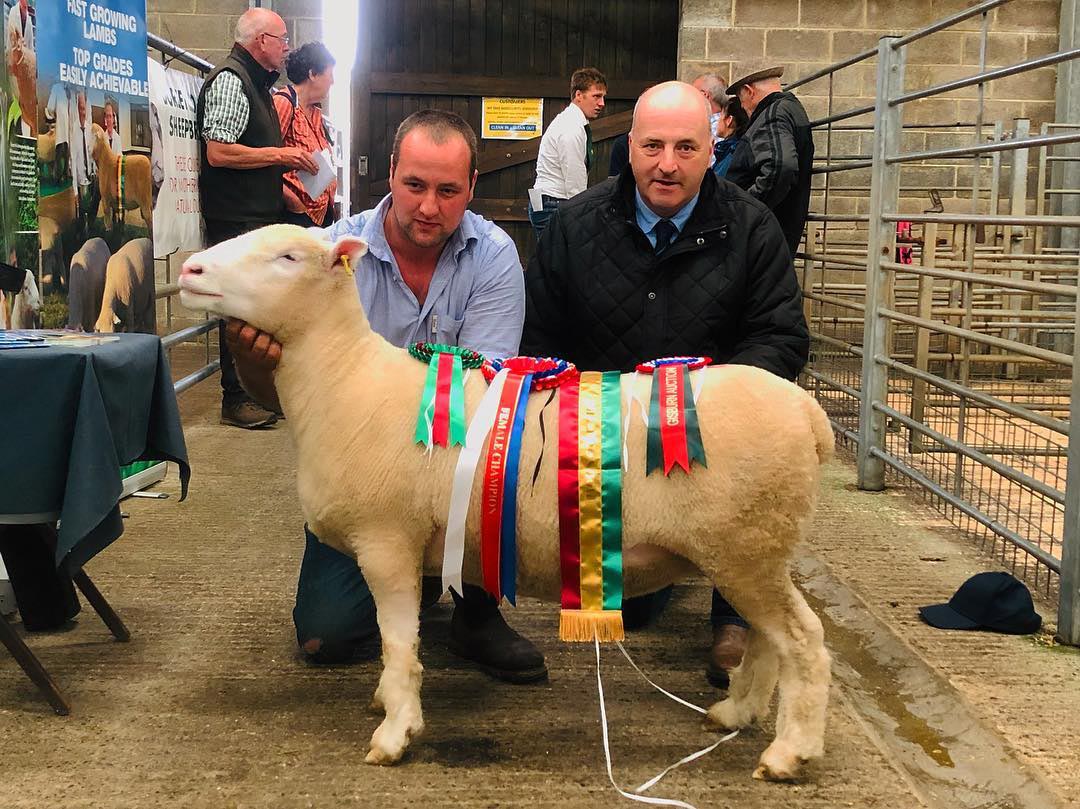 In 1875, Alexander Graham Bell (a Scotsman by the way!!) could never have imagined the impact of his invention on society and consequently the sale of sheep. But that development took over a hundred years to fully embrace. COVID19 has taught us that progress can be much swifter if we innovate and take ownership, whilst continuing to exploit the varied opportunities offered to us by our trusted breed society and auctioneers. 2020 will be long remembered ………… for doing things differently and the continued success of the Dorset breed!