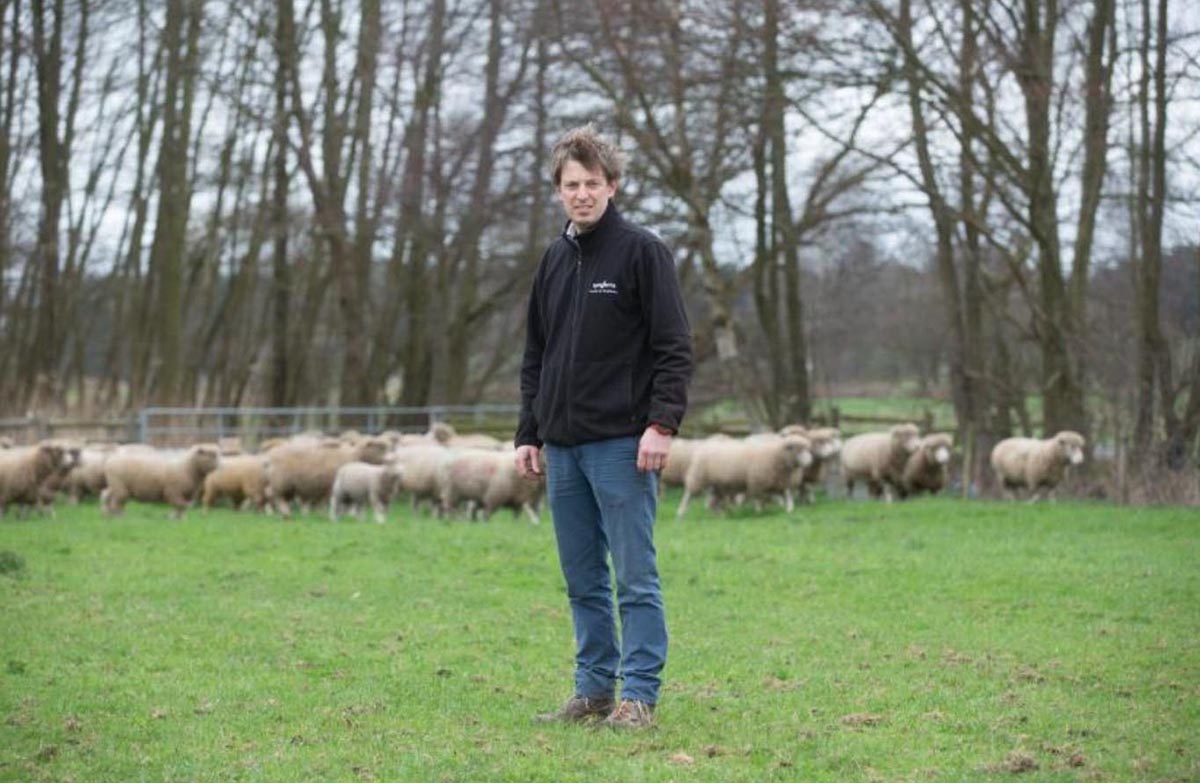 Dorset sheep, pigs and beef cattle play an integral part in helping the sustainability of intensive vegetable production for a farming enterprise in Suffolk.

Wantisden Hall Farms on the North Sea coast near Woodbridge, farms 1,351ha of predominantly arable land, of which 768ha is owned and the re-mainder is contract farmed.

Under the management of Tim Pratt for 11 years, the land farmed has doubled in that time by con-tract farming further arable areas, as well as investing heavily in irri-gation on the owned land to boost yields of vegetables to help in-crease output. Poorer permanent pasture previously not farmed has been brought into production for the livestock.

Free range outdoor pigs were the first to be introduced to graze aftermaths to remove potato volunteers and help in the control of potato cyst nematode - the biggest threat to what is the most profitable crop in the area. 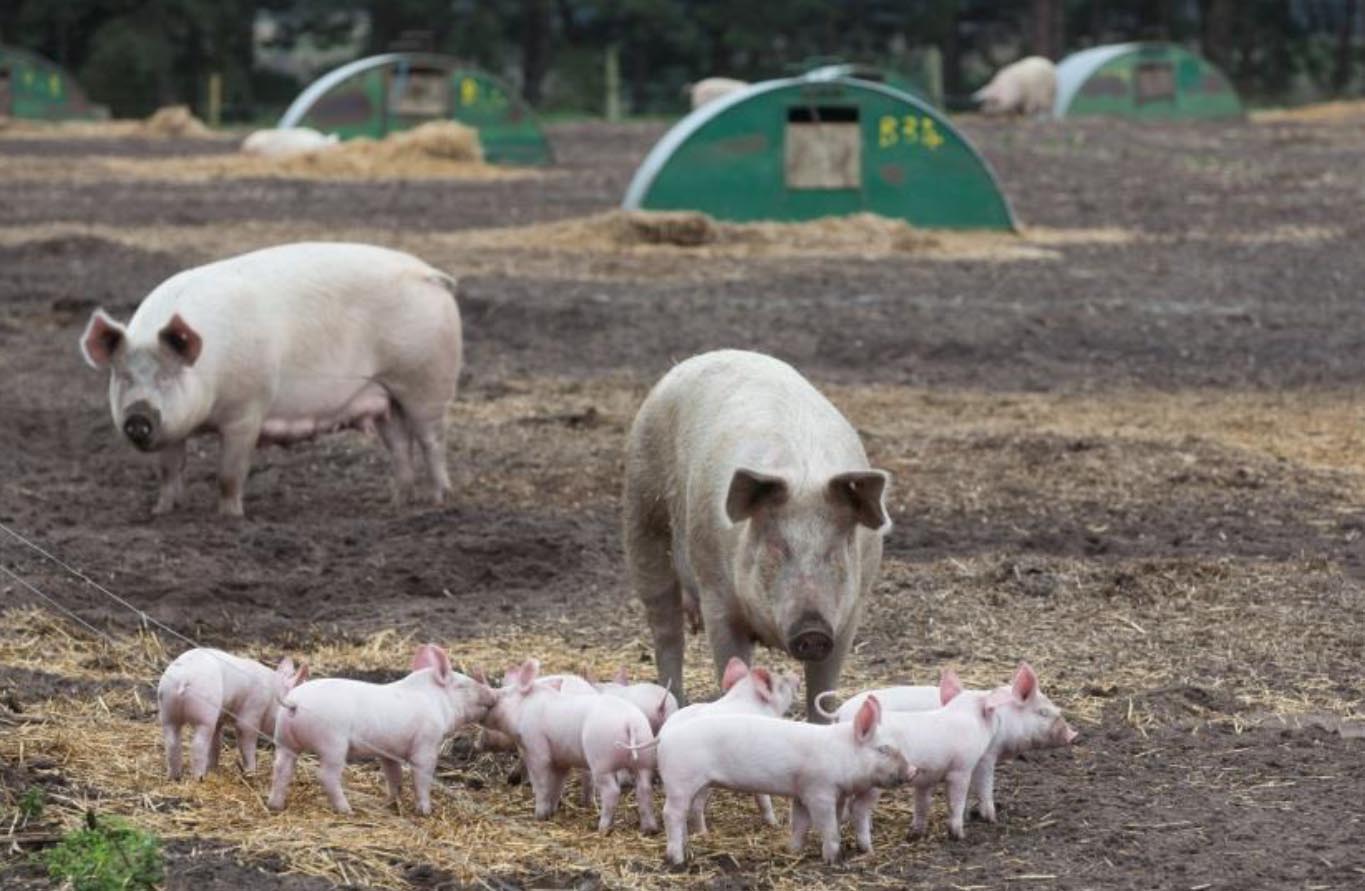 Four years ago Dorset sheep were introduced to the system to graze the crop residues - and such has been their success in fitting into the busy cropping regime that Tim has plans to increase flock numbers to 400 ewes. 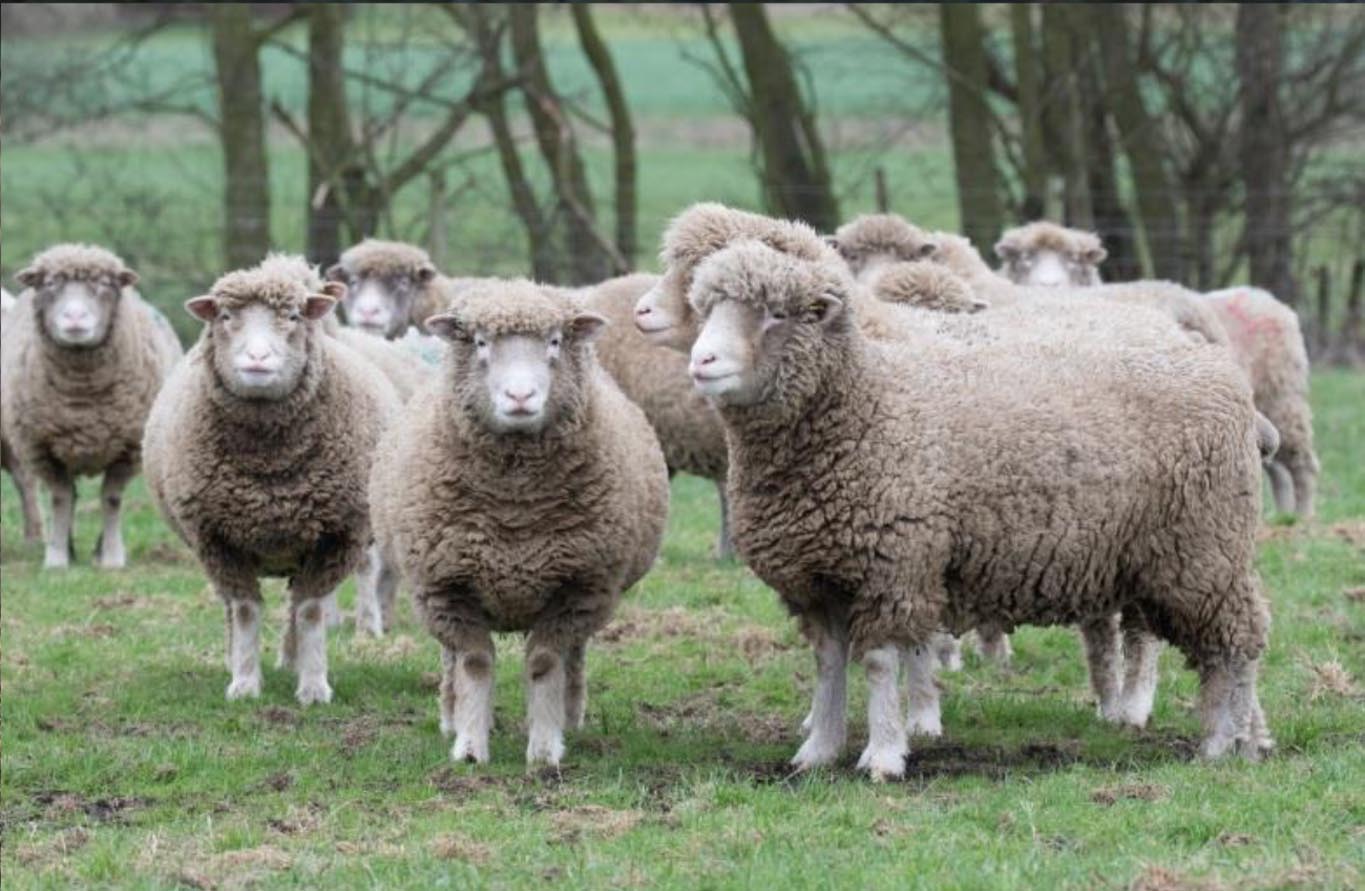 A herd of 30 Beef Shorthorn cows also graze the green cover crops and help control bracken in the park-land.

“The livestock are a good mix to fit in with everything we do here. We are a LEAF demonstration farm and hav-ing stock has brought many benefits, creating integrated crop manage-ment on our light, sandy soil,” said Tim.

The farm’s permanent pasture and marshland is in HLS and its marshland is a Catchment Sensitive Area as well as a SSSI covering Staverton Park, orig-inally a medieval deer park, and The Thicks - it is believed to be the largest area of ancient pollarded oaks in Europe, with some trees 1,000 years old. It is a habitat for rare orchids and rare invertebrates, as well as birds, including Lapwing.

Originally from Devon where his parents ran a dairy unit near Halwill, Tim first saw the versatility of the Dorset breed with its ability to lamb out of season when he worked for the Thomas family in Launceston, Cornwall, and he bought a couple of the sheep to establish his own flock.

After university, he moved to Suffolk 15 years ago, later taking up his role as farm manager at Wantisden Hall Farms, owned by JH Kemball and Son.

Easy Care ewes were the first to be introduced to the system with 400 lamb-ing in April. All have since gone in favour of the Dorset which fits in well with the vegetable regime. 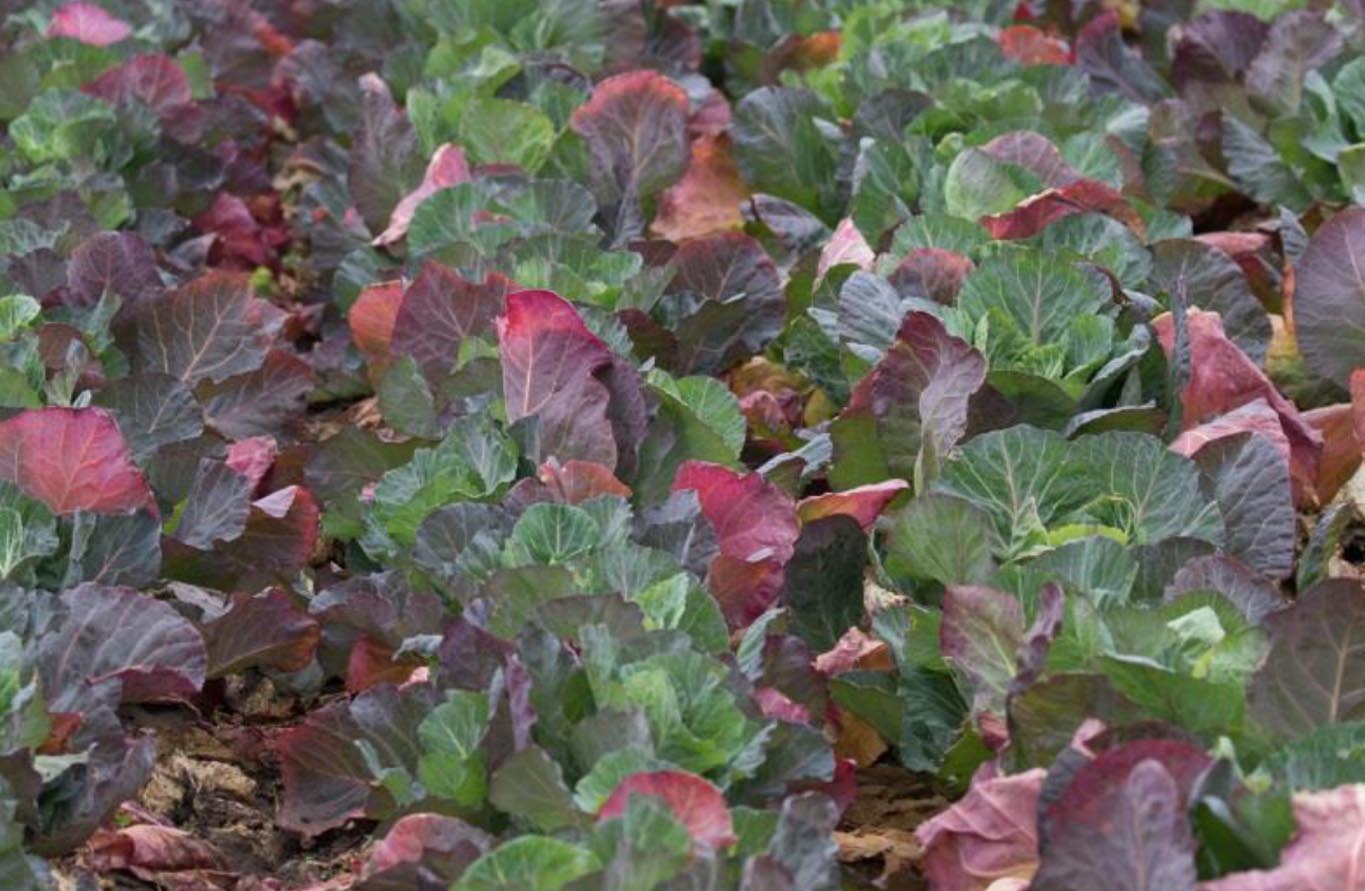 “The Dorset is very versatile and we lamb the ewes outdoors in September and October when there is a lot of crop residue from the spring greens which feeds both ewes and growing lambs,” said Tim. “Because the land is light and sandy, we have no is-sues with keeping the sheep clean.

“Managing the sheep in the winter is very easy with not a lot of work. Ewes which are milking heavily are given access to feed in November. Lambs nev-er have problems with worms or fly. Creep for the lambs and feed for the ewes amounts to 2t of home grown barely plus pellets each year. 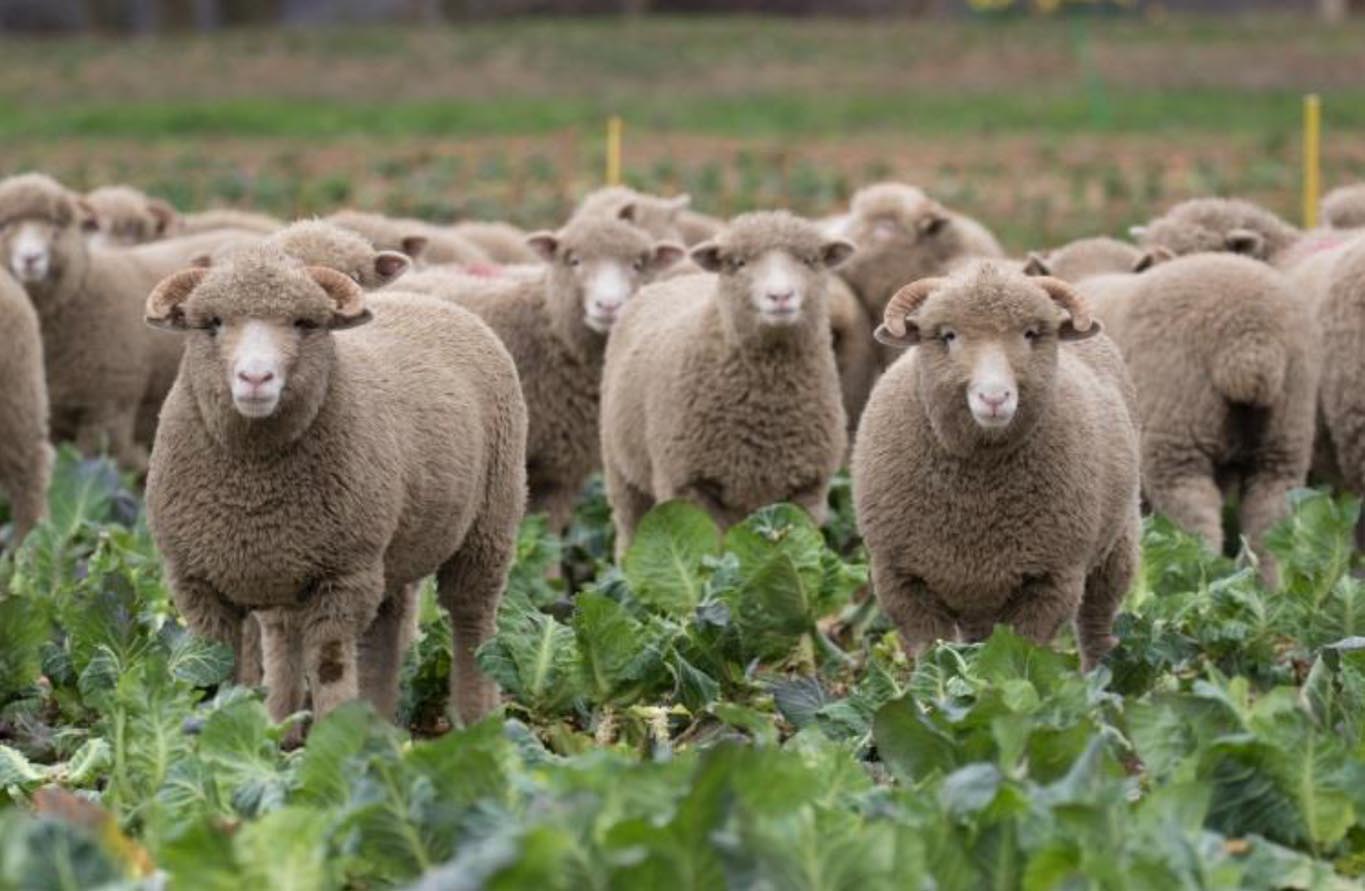 “The aftermaths which would otherwise be ploughed in are providing grazing which costs nothing and does not inter-fere with the arable rotation but is ben-efiting it by adding manure to the soil,” he added.”The land ploughs nicely be-hind the sheep and pigs.”

As well as potatoes and spring greens, the farm also grows a large area of carrots, onions and swedes. The rotation on the lightest land is pigs, sugar beet, potatoes, onions, carrots and winter cereals. 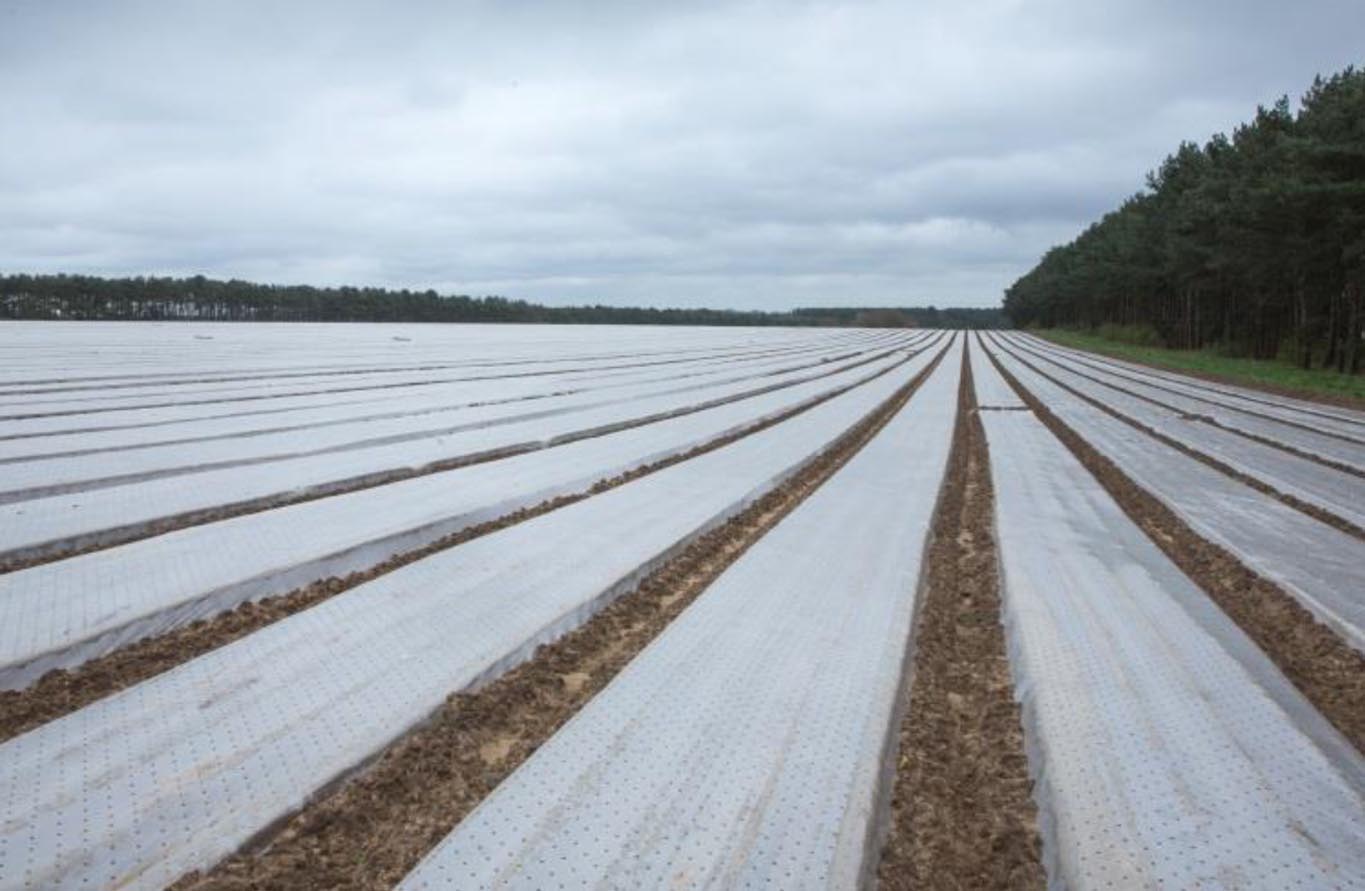 “The aftermaths which would otherwise be ploughed in are providing grazing which costs nothing and does not inter-fere with the arable rotation but is ben-efiting it by adding manure to the soil,” he added.”The land ploughs nicely be-hind the sheep and pigs.”

“From March to September we are very busy with the vegetable crops, har-vesting and planting virtually every week. In March, by which time all the male lambs have been sold, we turn the ewes with the ram onto the grassland and they go to the ram mid April,” said Tim.

This includes land which has been brought back into farming - parkland and several marshes which is all in HLS and we benefit from extra payment be-cause the Dorsets are a native breed.

“The ewes just tick over, grazing the grass. We don’t have any problems with worms or flies and one member of staff helps me with them when required.

“The Dorsets are working very nicely for us. They bring in extra income from the lamb sales with little input and the extra HLS money.”

The land is also in a Catchment Sensitive Area and grant aid from this scheme and the HLS has assisted with fencing on the grazing ground. For flexibility, the arable land is divided with electric fencing. 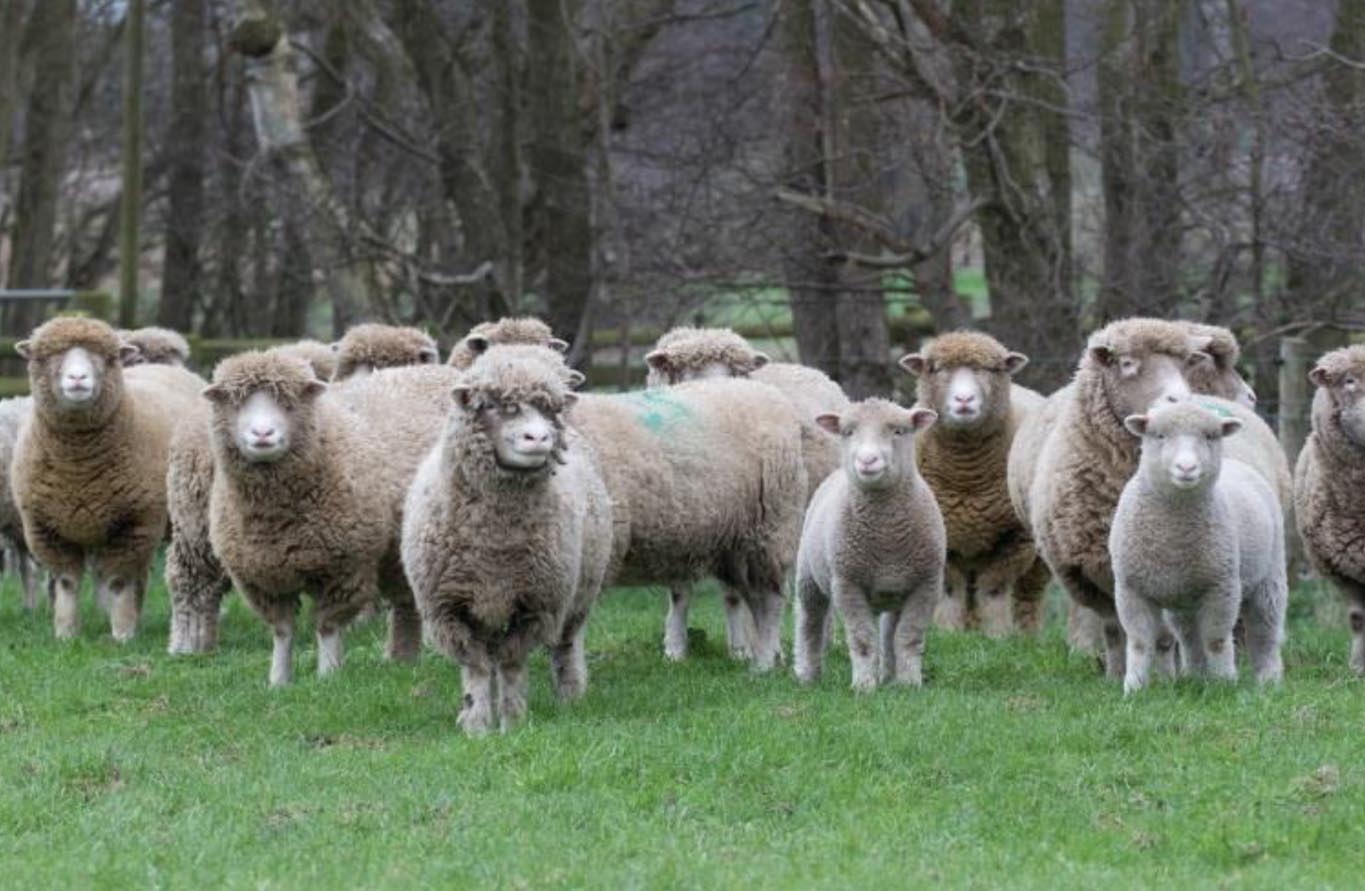 The first ewes were registered with the Dorset Horn and Poll Dorset Associa-tion in 2013 and now flock numbers run to 120 horned ewes (Staverton flock) and up to 90 polled ewes (Deben flock). 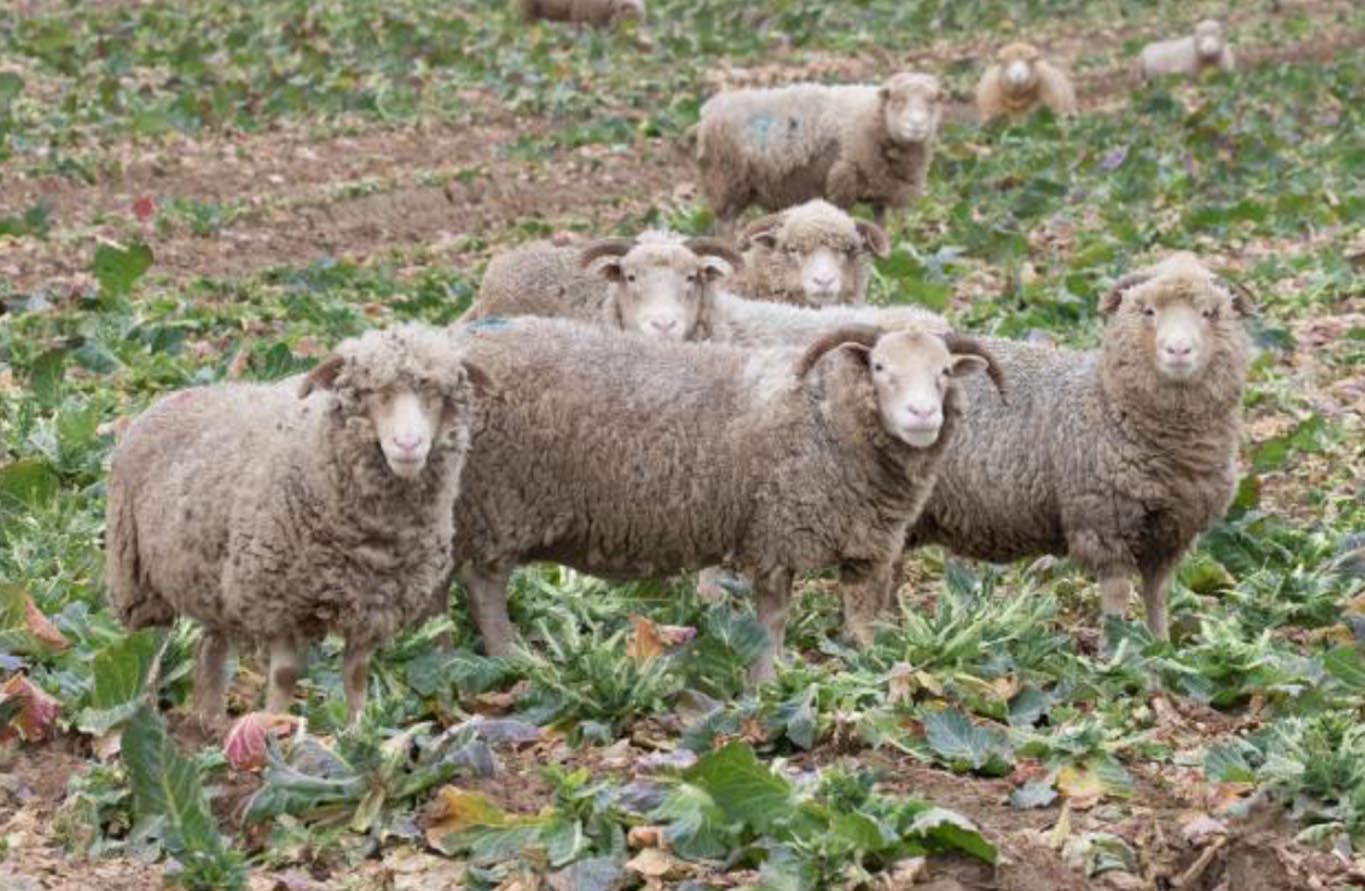 Such is the breed’s success that Tim aims to run 400 ewes half of which would be horned and the rest polled. The flock is Signet recorded as another breeding tool but most of the selection is by eye and this is usually backed up by figures.

To expand the flock, 90% of ewe lambs are kept as replacements as well as up to six rams for breeding with the remainder of the males going for slaugh-ter. 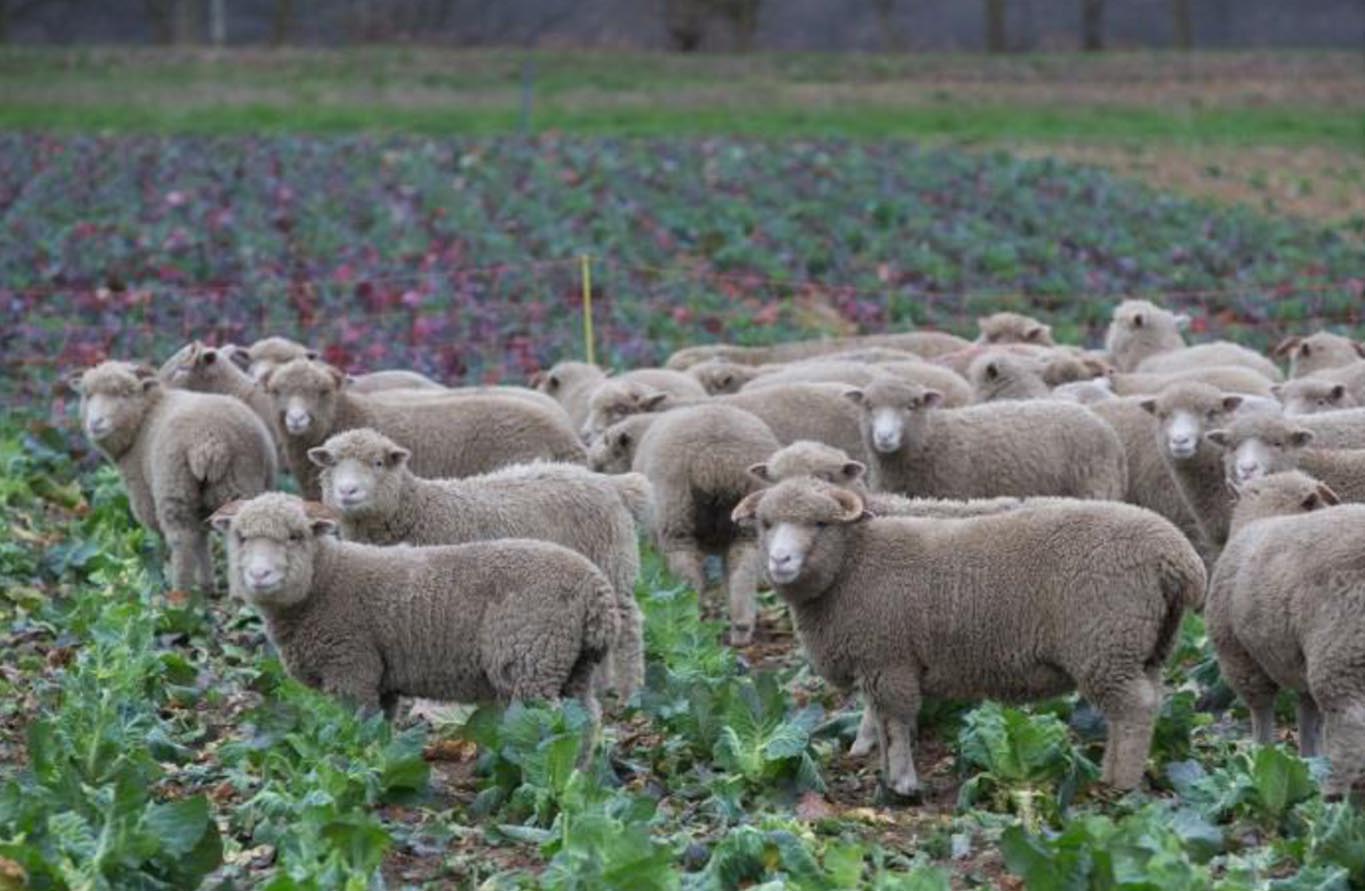 This years 100 ewe lambs will be added to numbers with the intention of be-ing self sufficient, hopefully by next year. 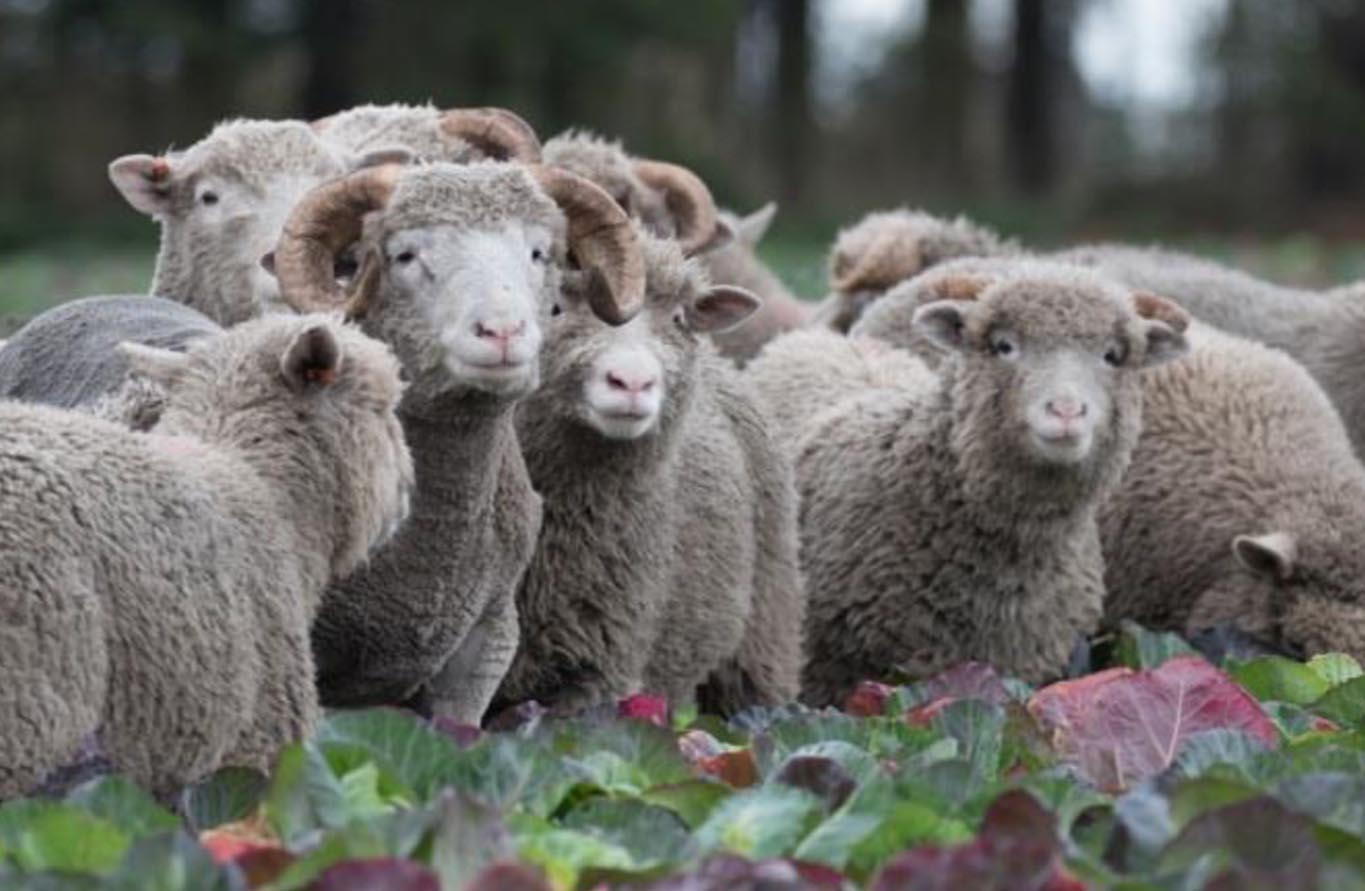 To introduce new bloodlines from top rams, a number of the polled ewes are being AI-ed this year with semen from three sires. The double muscling My-omax gene has also been brought into the flock with the purchase of a gene carrying ram at the May Fair.

Tim is also looking for a ram to introduce new bloodlines to the horned ewes which have a relatively small gene pool compared to the polled sheep.

Tim attends the Dorset association May Fair sale in Exeter in early May where at last year’s event he won best horned exhibit at his first time of show-ing.

Two horned rams averaged just under £800 and Tim sees this as another in-come stream for the future. He has sold rams to a neighbouring farm where they are being put to Mule cross Suffolk ewes to lamb traditionally in April.

The ewes currently average 160% lambs reared with little mortality and Tim hopes to improve on this as the flock progresses.

Lambs are principally sold deadweight. Earlier this year the lambs were grad-ing at R3L weighing 21-22kg deadweight. They were averaging £90 a lamb. 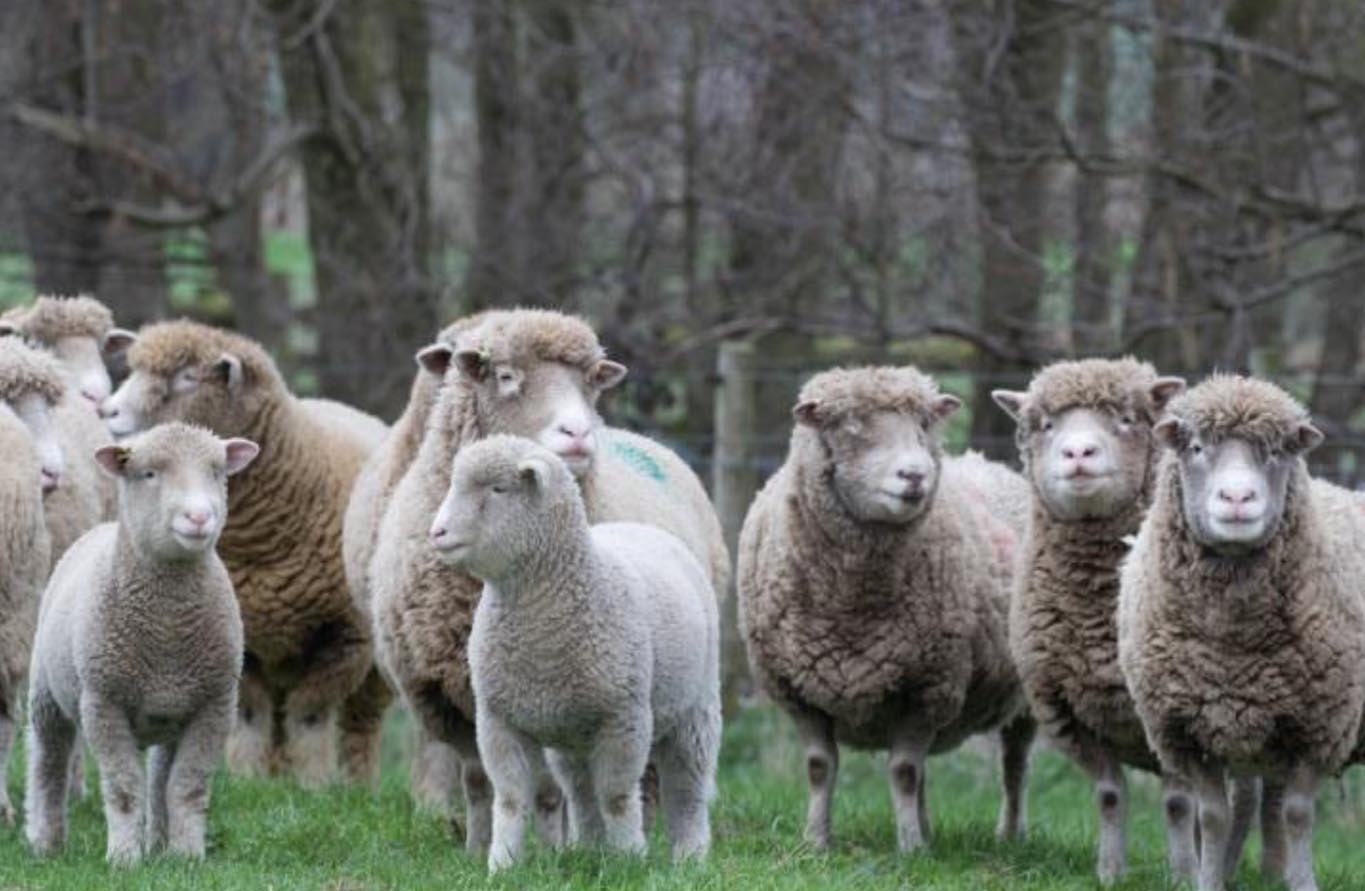 The lambs straight off their mothers also attract a premium - both with local butchers and farm shops which prefer to sell the young lamb rather than hoggett meat.

Another outlet for the lamb is boxed meat sold directly off the farm with around 30 boxes of spring lamb sold each year bringing in £110 a lamb.

The lambs straight off their mothers also attract a premium - both with local butchers and farm shops which prefer to sell the young lamb rather than hoggett meat.

Another outlet for the lamb is boxed meat sold directly off the farm with around 30 boxes of spring lamb sold each year bringing in £110 a lamb.

Another possibility when numbers increase could be to sell lamb to a scheme such as that run by supermarket Waitrose - which buys a lot of the vegeta-bles from Wantisden.

The farm markets its vegetables with five other producers to many of the large multiples via a marketing group called The 3 Musketeers and Suffolk Produce, based at a nearby disused military airstrip.

Potato harvesting from June to October gives yields from 25t/ha for the early crops to 50t/ha for the later crop. The aim is to produce 1 million tubers per ha of Maris Peer, all under 42mm to meet the required exacting criteria.

Generating further income, an anaerobic digester was built four years ago and it is fed by maize, rye and sugar beet pulp. It also gives Tim liquid and solid digestate to help cut fertiliser bills.

Intensive vegetable production will continue the main enterprise on the farm. Tim plans to expand production in a sustainable way while placing emphasis on environmental concerns.