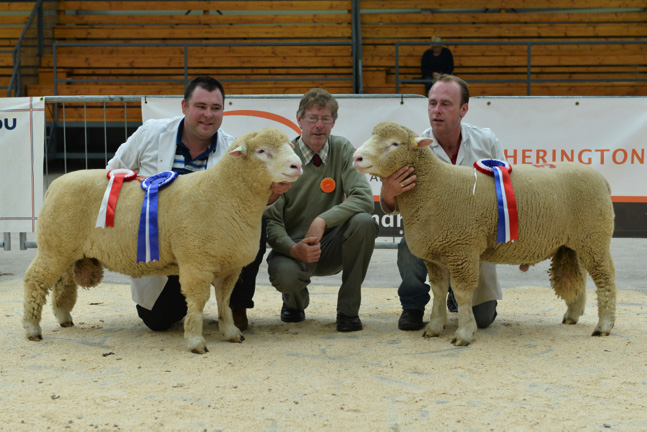 This December 2013 born lamb carries two consistant bloodlines of Ballytaggart Premium from his sire and the homebred mother line from Ballytaggart P220, a Lynx daughter. Unstoppable won the Reserve Male and Reserve Supreme Champion tickets at the pre-sale judging and was sold to Hugh Cory from the Vale of Glamorgan.

Following at 1,200gns was the days Male and Supreme Champion winner, a ram lamb from William & Karen Carson’s Downkillybegs flock based near Ballymena, Co.Antrim. Downkillybegs. Ulrich is a son of Oliver Tree Nik Nak who also bred the Female & Reserve Overall Champion at Carlisle in 2013. He also heads to the Vale of Glamorgan for Hugh Cory.

Also coming from the Ballytaggart pen was a lamb ram selling for 850gns. Ballytaggart Underestimated is a son of the flocks new stock ram Richhill Samson and was half brother to the 2013 Carlisle Champion Trojan. He caught the attention of M Care of Helston Cornwall.

Leading the female prices was a pair of gimmers from the Huish pen of David Rossiter from Devon with both selling for 600gns each. The first to sell was a homebred female by Hilltop Lloyd and bred from an Olivertree High Society sired mother. She heads to West Cumbria for Messrs Mawson of Seascale.

The second gimmer to sell was a Downkillybegs Humdiner sired daughter and out of a Huish Figaro bred mother. She sold in lamb to local interest G Kerr & Son of Wigton.