The NI Dorset Horn and Poll Dorset sheep breeders club held their 6th spring ‘Dorset Diamonds Sale’ on Saturday 27th March 2021 in JA McClelland Livestock Mart, Ballymena. In what can only be described as a remarkable day for breed history with multiple breed records broken, the Dorset breed was well and truly launched into the limelight. 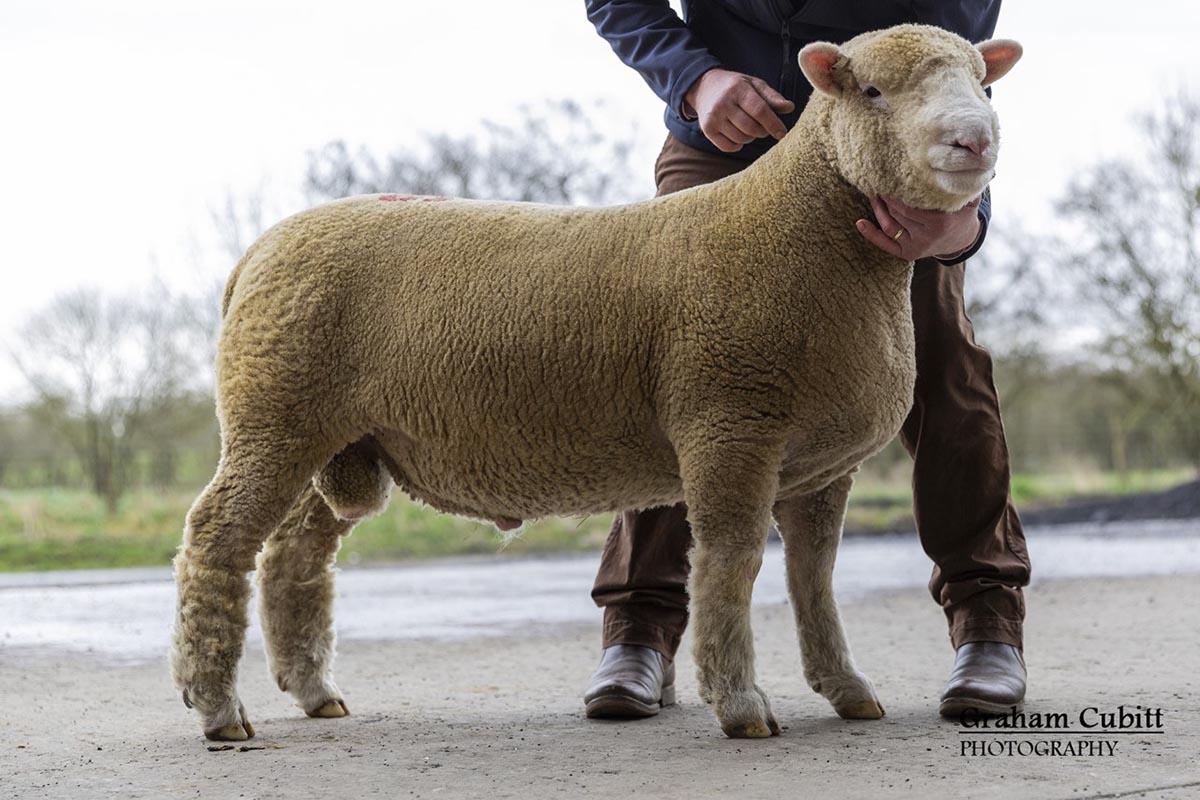 Previously the top price for a ram sold at a NI sale was 2200gns with the overall record at 4000gns and National record at 6000gns. Smashing all three of these records was lot 46 from William and Karen Carson, Downkillybegs with their September born ram lamb ‘Downkillybegs Dazzler’ who stood reserve champion of the day. Sired by homebred ram ‘Cola’ this perfectly balanced lamb exhibited outstanding breed character and body fetching 6600gns selling to Stephen Cobbold, Suffolk.

In close succession was lot 63 from Thomas Wright, Ballytaggart with his ram lamb D2485 sired by stock ram Olivertree Archie. This stylish lamb displayed fantastic confirmation and after a flurry of bids both on line and on the floor was knocked down for 6500gns again heading across the water, this time to Jeremy Durrant, Essex. The next top price of the day went to Andrew and Caroline Kennedy, Maineview with their powerful ram lamb ‘Maineview Dropkick’ sired by Richill Zulu, selling for 4500gns, this time staying in NI with William McCracken in Loughgall. 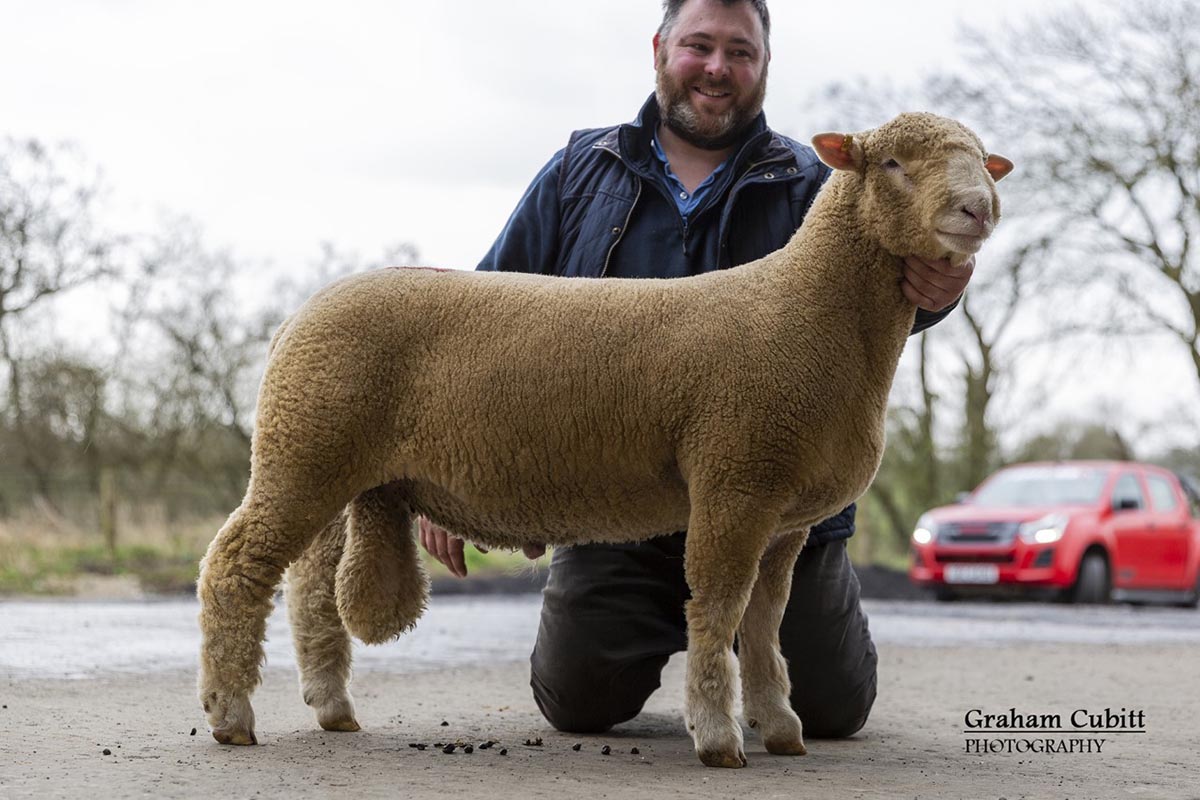 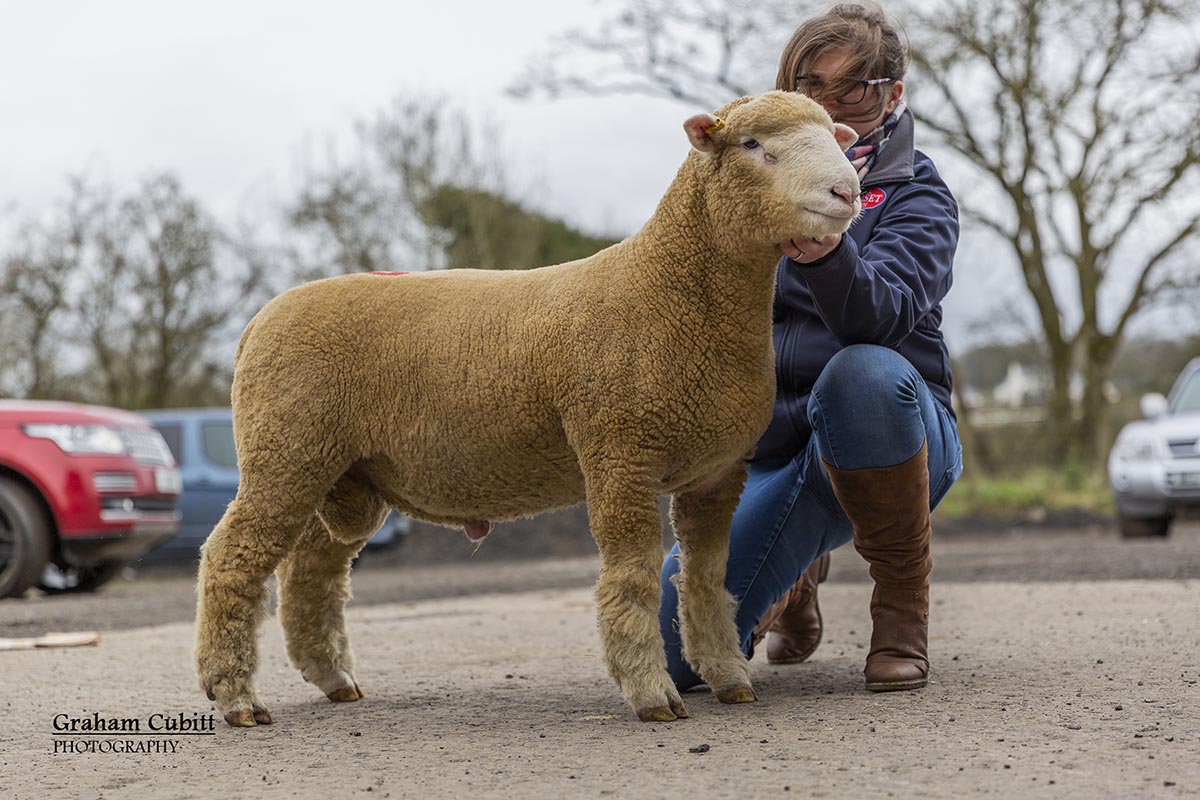 Next up was Laura Weir, Lisnafillan with lot 40 ‘Lisnafillan DiMaggio’ a Ballyhamage Christie son showcasing excellent presence selling for 3900gns to join fellow breeder Thomas Wright and his Ballytaggart Flock in Ballymoney. Allister McNeill was next to follow, achieving 3400gns for lot 27, Kilvaddy D1202, an impressive lamb sired by Rossiz Wildfire, finding its new home with Richard Fitton in Burnley. Laura Weir continued her success with lot 41, another Christie son knocked down for 2000gns to Marianne Sheed in Huntly to join her Strathbogie flock. Overall trade for ram lambs was outstanding, with the average for ram lambs finishing up at 1468.91gns which added to the expansive list of records broken. 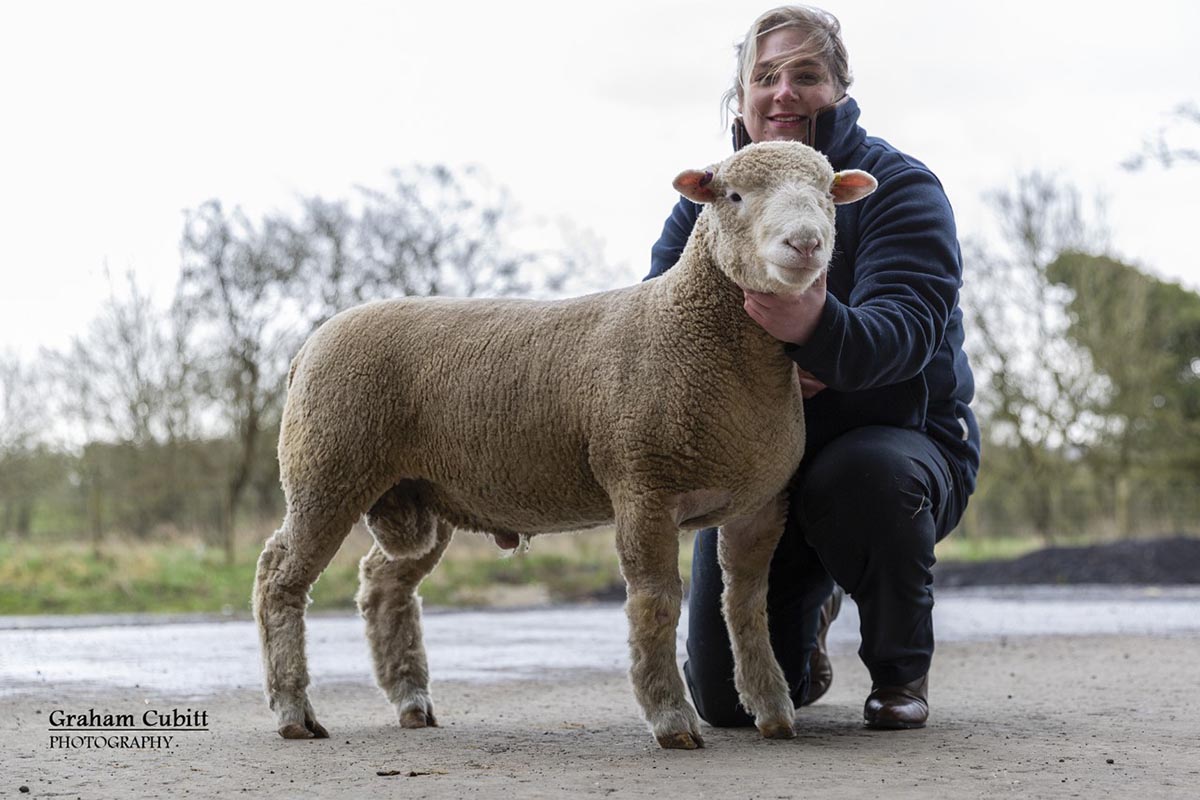 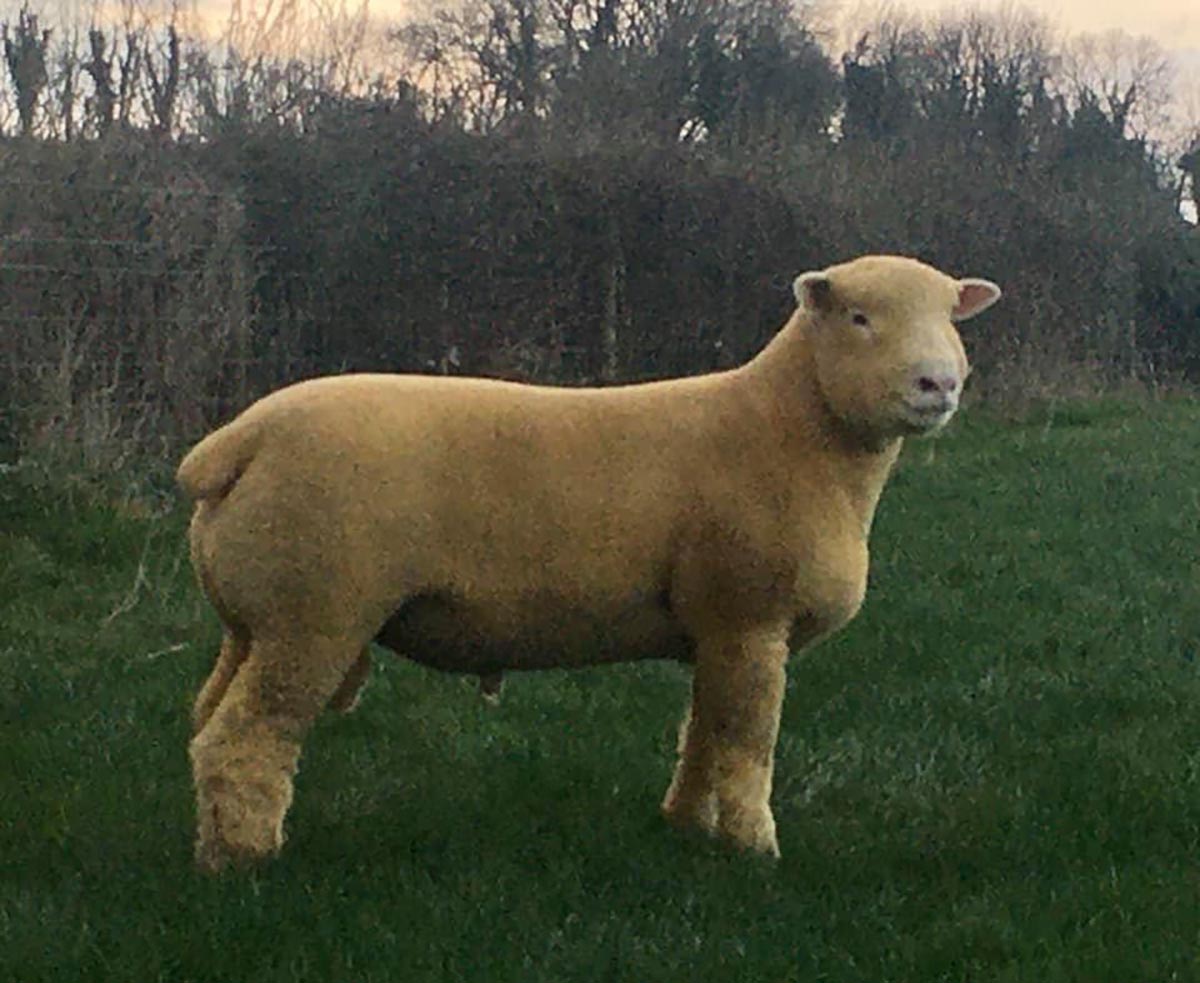 Coming out on top in the female section was overall champion, lot 10 from Laura Weir, Lisnafillan. Displaying a profusion of bone, body and character she was snapped up by James Johnston, Aghalee for 1500gns. Closely followed behind was lot 16 from Allister McNeill, Kilvaddy, this much-admired lamb sold for 1150gns finding its new home overseas with Richard Fitton, Burnley. Laura Weir struck again with pen mate to the champion, lot 11 sired by new stock ram Ballyhamage Christie, selling for 1100gns to John Lynd, Swatragh. 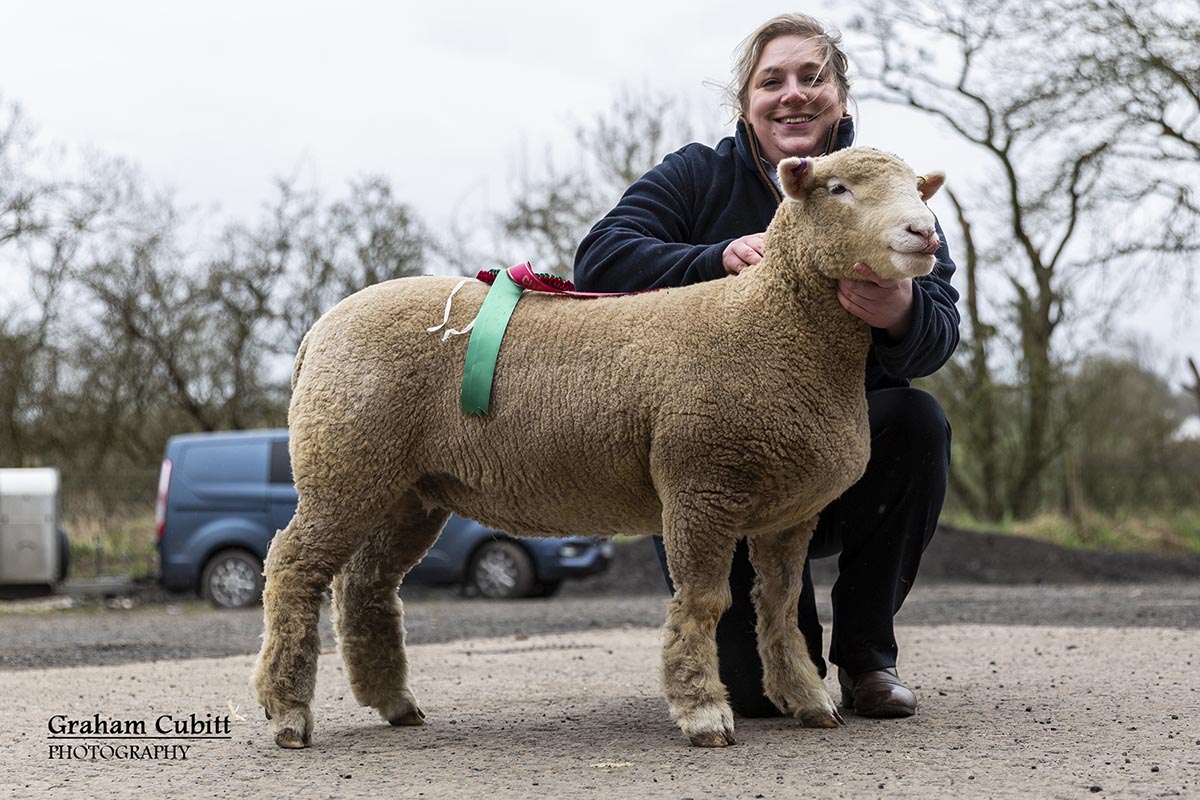 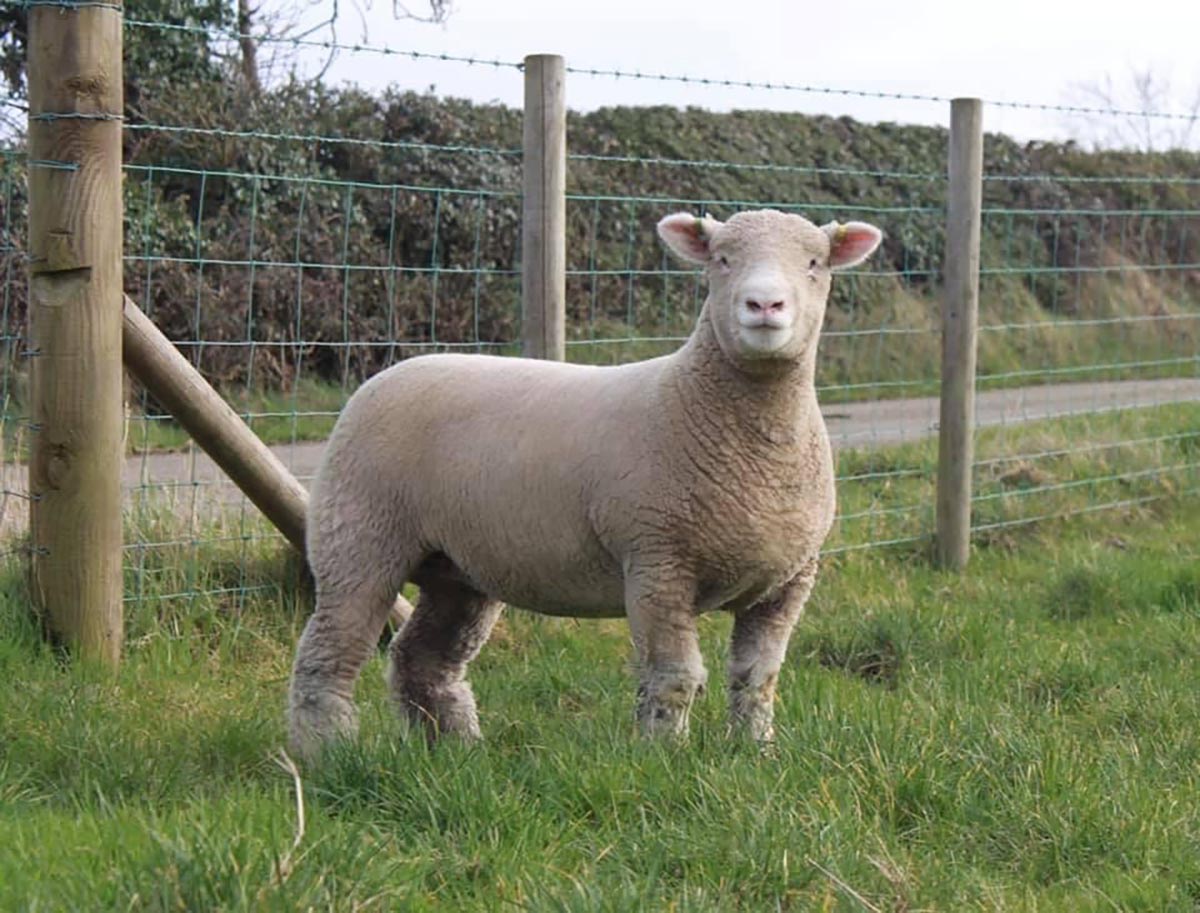 The Northern Ireland Dorset breeders club have recorded this as the most successful sale to date with surge in demand for stock indicated by the prices received. This of course is bolstered by the calibre of sheep NI breeders are turning out, attracting an ever growing appeal from buyers both here and on the mainland, looking to add that extra bit of quality to their enterprise. Particularly in recent years, interest from across the water has rocketed with more and more NI bred Dorset’s making the trip across the water, either privately or through sales. This sale in particular being the perfect example with eight sheep purchased by mainland buyers including the top two prices, a big incentive being the assurance of transport put on by the NI Dorset club.

The Northern Ireland Dorset breeders club wishes to thank all breeders, buyers, sponsors and of course the staff of Ballymena Market for making the event such as success. The next upcoming event will be the annual July Premier Sale, taking place on Monday 26th July 2021 in JA McClelland Livestock Mart, Ballymena.